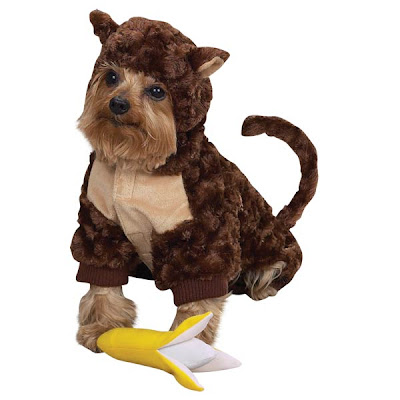 I ordered this special for my doggie GUS to wear today!! This is not him, but a model I hired to show you all a Monkey-Dog!!
BTW... How great was the taped scene with Carter telling Franco about Michael?? Loved Jason/Dante watching. NICE touch writers. No real "rape" word but Franco said "be creative" to Carter and then Jason went nuts.  I WONDER if Dom was scared of Steve Burton!! I was! DAMN!! I bet Dominic had bruises after that. eesh...
I love that Helena is sitting with Niz. They are making her nice all of a sudden??(well, for Helena that is)  She needs to stay on--she does. HAVE HER MARRY EDWARD!!!!!!! Damn it...Take over ELQ. Hells can be such an asset.
Poor Liz...losing Shirley and the baby. Sad..*sniff* I liked Mama Walton on the show.
Brooke Lyn would have a belly ring..come ON...she'd have a giant one if not a tattoo!!
Warren is mad enough to go get a gun... Poor Mac Daddy is going to get shot. wahhh. Ethan takes a shot and Michael is protecting Krissy from Warren!! eek!
MOCA set is going up. Nice touch with the classical music.  I'm glad they filmed the Stage-hands all "mimed" out in white gloves. LOL The whole art show was cool...liked how Jason saw his face up there.
Nikolas/Lucky see Franco on the monitor where the empty baby crib is...told ya he took him.
WATCH TODAY, it's good. And I don't often say that!!
Can you even believe I won't be here tomorrow to live blog for the MOCA event???? LIFE! Gets in the way!! Booooooooooo. I will DVR and I will watch it, you can be sure. Hell, my lobster was THERE!! I HAVE to watch! LOL. So, check later tomorrow night ok?
By kdmask - July 22, 2010
Email ThisBlogThis!Share to TwitterShare to FacebookShare to Pinterest
Labels: jamesfranco, monkey