Tuesday on the SHOW 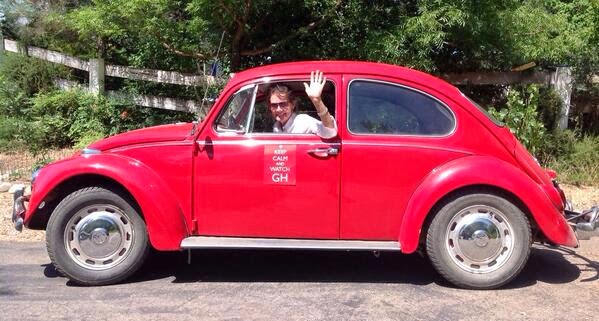 Lynne Herring tweeted this today! It was her Grandmother's car named "Betsy"!
SEE THE GH sign on it?


Sorry I missed yesterday-- I was at the dentist!

Anna Mention today-- the other one. Rumor is she's coming to Port Charles.

Ric and Sonny. You think Sonny will "hear" AJ's cries of "It's not me" when Ric tells him the truth?
nope.
BUT! Molly believes him

Yeah, Diane was on today and charged Liz for a lost appointment. Heh.

Jordan got out because DANTE didn't "read her her rights" correctly? LOL Okay then.   Why does Julian tell Jordan all this crap when he JUST MET HER? ugh.  I think it's her boobies. . giggle

Duke--er.. and Anna. That strangely doesn't move me at all anymore. They are chopped up and down on this show.


ANNA and Jordan meet in the park? Like that? NOT obvious at. all. LMAO Anna realizes the boss isn't Ric.

Tomorrow's show? Lulu is told maybe she was 'misdiagnosed"! ahahaha. Oh lordy
By kdmask - June 10, 2014
Email ThisBlogThis!Share to TwitterShare to FacebookShare to Pinterest