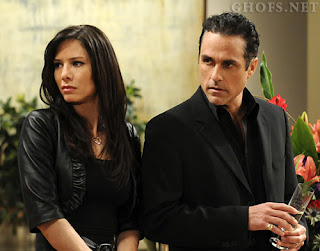 
I'm still in awe of the whole "GH Experience" I had last week. If I didn't know better, the entire production/head writing team changed when we weren't looking. From the re-introduction of Lucky to the mouth-dropping show on Friday, I really sat in disbelief .
It takes A LOT to impress me. Those of you that have followed my blog know that I am usually very cynical, bored and angry when it comes to this soap. Block taping, recycled stories and a total lack of ensemble work would drive me to tears. Ever since the carnival this summer, things have begun to change. Slowly but surely, I'm falling in love with GH all over again.

The return of Jonathan Jackson was difficult because I genuinely liked Greg Vaughan's "Grown UpLucky" and had become used to his performances. I didn't like the writing for the character however, and I'm going to say it: I don't think Tony Geary did much to help matters. His performances with both Jacob Young and Greg were wonderful as usual but lacked a certain charm and lightness I'd come to love from him. The minute JJ was on screen, it was back. "Cowboy" became meaningful again. I'm still getting used to seeing he and Becky together again but it will come in time. Having Genie Francis come back would make my heart go BOOM! So hurry up, get her signed!!

On to the Corinthos Mobular Spectaular we've been subjected to for years now. I think if I took all the times Mr.Guza promised something "huge" or "life changing" for Sonny I could have a DVD 55 hours long. Ditto Jason. Whatever..it was always the same. One of them in a room with one other player, talking about angst and how hard it was being a gangster. Someone gets shot or there's a fire and we'd move on. Yawn. My favorite thing that Sarah Brown's character Claudia Zaccahra has done is to FINALLY give us the push I've needed to see in Sonny for years. I have to admit I was really sad hearing she was leaving. I was enjoying ClauSon and thought they'd make a fabu mobular couple. Now that the story is playing out, I think the road to the end of Claudia will be paved with wonderful memories. The performances ALL the cast gave on Thursday and Friday were phenominal. From Jane Elliot's Tracy adding a bit of humor to Lexi's Kristina watching her father rant like a lunatic were perfection. I remember watching Steve Burton watching Maurice talk and have a hint of tears in his eyes. Laura Wright's face when she realized Jerry Jacks was involved with the shooting. Don't even get me started on Sarah Brown. Holy MOLY. Knocked my socks off.

Maurice, most of all, has to be commended for his very VERY subtle performance leading up to his blow up Friday. Usually in those circumstances, an actor will give a face, or let you know things are up when the other character's back is turned. Maurice didn't flinch from his "calm happy guy" stance before his toast to Claudia. You knew it was coming, it was simmering under the surface and even KNOWING the scoops---you were on the edge of your seat waiting for him to erupt. Claudia's joy turning to nervous horror was also not over the top. Sarah started out happy, glowing and then shaking. Watching she and Laura Wright in the car (with a split head shot of the two of them) was unnerving.

The team popped for extras. We saw Mercedes, Marty and Mike...all of whom add to the canvas. Bobbie, Audrey and Leslie were all recently at the engagement party, even Luke said "this doesn't happen often". It wasn't a skeleton crew like we had for the toxic poison storyline (remember that horrible "cocktail party"?) The extras weren't window dressing like they were for the Black and White Ball. They were IN there. Even the rent a car guy was 'in there'. The whole thing took 2 days..they didnt' stretch the party out for a week. Kudos to all--- the dialog was priceless. Alexis was consoling Kristina but also took Sonny's hand because she knew he was devastated. Jax was so crazy he threw his ethics out the window and actually told Mac to let Jason go find Carly. Olivia? Her scene with Sonny at the end of the party was fantastic. (the girl has chemistry with a lamp post!) Brandon Barash just tore at my heart with his frantic search for his sister. Morgan and Molly rescuing him was such a great touch. Even Ethan grew on me this week. Who would have thought it? Julie Marie Berman as "drugged" was played perfectly and she and Dominic sure have that spark that's been missing in most of Lulu's relationships. (and HELOOOO, he's one hot shirtless guy, isn't he?)

I am the biggest critic out there when it comes to GH because I know most of the actors and think they are just about the best on TV daytime OR prime time. I've seen great writing and know what can be. This week was a delight. My only TINY regret is that Carolyn Hennesy wasn't around because she's off being famous on Cougar Town. With Max and Milo on hand, I would have loved to have seen her at the party. But hey, can't have everything!

I'm not sure what's changed behind the scenes and who hit who in the head with the frying pan finally, but it's working. THANK YOU for giving us more vets, more character movement and really GREAT cliffhanger scenes. THANK YOU for more than 2-3 characters in a room. Having Patrick and Jax have a little talk in the hospital meant the world to me...(easy to please?!) Mayor Floyd popping up at the party was a fun surprise too. Alexis' face was much like mine: DOH!

I have these two eppies on my DVR and already watched Friday's 2x over. I realize that that it can change on a dime but for the FIRST TIME in a LONG TIME I can't WAIT for Monday's show. And I know the scoops! Doesn't matter because I know there will be surprises and the actors will be amazing. Can't wait.
By kdmask - November 01, 2009
Email ThisBlogThis!Share to TwitterShare to FacebookShare to Pinterest