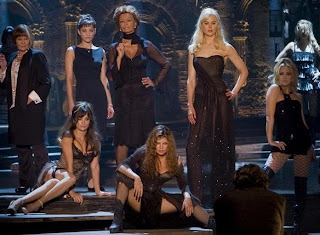 
What a week. Part of me was ready to throw something at the TV again. After the great Claudia demise, I was waiting for some more smash-bangin' stuff happening but got Michael trying to figure out where to live AGAIN. :eyeroll: More Niz/L&L2 Angst. I wasn't running to the TV like I was before. Don't get me wrong, the show is still improved but GH constantly gains steam then withdraws. Case in point: Cassadine stuff. First we had the whole "Portrait" birth certificate find by Helena. That was dropped for 5 months. Then, we finally had a bit Valentine mention, Luke hostage, Hells in GH--now nothing. NOT even a mention!! There's no reason that story couldn't have started to play out a bit instead of completely disappearing. Speaking of--I guess Dr. Matt is finally going to get some story--with Patrick's ex "Lisa". Gee, thanks. Just in time for that, another doc is showing up, Steven Lars. Uh..just what we need? I don't think so.

We've seen enough Franco Promos to last us a lifetime and if they play "Mad World" one more time, I may have to ban it forever from my iPod. (Tears for Fears version). It was a great tool first go around...couldn't they find other songs? Theme from The Exorcist? Now we know that Franco is a Jason-worshipping artist that wants to BE him (doesn't everybody?) and is hell bent on recreating his murders. Claudia's being photographed--with a person or a mannequin? I so wanted her to be dug up...;) I'm spooky that way! I'm excited for the story and the whole main-stream media buzz about this story. I am going on record however, that since we know it's ALL GUZA--it will fall squarely on his shoulders if it flies or not. Keeping fingers' crossed! Read contactmusics interview about the "massive script" that GH had in store for him (that's for the block taping, btw)

Look for the movie "NINE" to invade ABC shows, including GH. Maybe they'll sing songs from the musical at Karaoke night? Get tickets to the show? Mention it a few times? It will give me something to look for when I'm bored.

Speaking of bored, I have to mention AMC at this point. Only watched about 20 minutes this past week. I didn't miss it a BIT. NOT one bit!
GH NEWS:

Our fave, Carolyn Hennsey (Diane) has been asked to participate in this year's Hollywood Christmas Parade on Sunday, November 29th. This year the parade will also enjoy nationwide coverage on MyNetworkTV on two broadcast dates: December 10 and December 24, 8:00-10:00 p.m. Pacific Time.
Did you know you could bid on the chance to help build a Habitat for Humanity House with your fave GH star? Go to "The House That GH Fans Built" What a fun project...for a great cause. Slots are at $0 for Brandon Barash, Bradford Anderson and John Ingle...get in there! Watch a fun video with the GH stars on Habitat for Humanity.org

Next Sunday I shall be at Nancy Lee Grahn's event in NYC! If you are going, please look me up. I'll have lobster necklaces for the Wub Fans out there! It's my first GH Event and I am excited...it should be filled with fun. Here's hoping I can twitter from the actual event. If not, I will blog right after. We are taking items for Nancy to sign for the AIDS WALK NYC in May. Alberta the Lobster (pic top right) is going as well! (think I can get Nancy to pose with her?)

Did you hear that GHOFS is launching again? This time with fan bloggers! We've missed Robin and the site, so hopefully it will be running for a long time to come.

Can anyone help a fellow wubber out with identifying this song? Tess is dancing to someone on the start of this OLTL Clip on YouTube. I can't hear the lyrics well enough to even google it. YOU?

Finally, check out the SCOOPS and RUMORS up on the WUBS NET! If you can, hit an ad or two and remember you can order from Amazon with the button on the top left of the site. It all helps the charity donations I give in the fans' names and the site upkeep.

See you on Twitter and Tomorrow on ze Blog!

By kdmask - November 15, 2009
Email ThisBlogThis!Share to TwitterShare to FacebookShare to Pinterest