Monday on the Soaps: Chili is on the Menu! 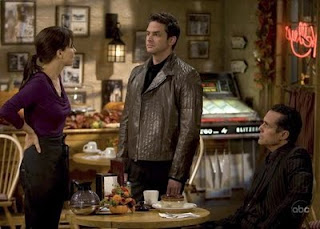 OLTL: Love the fact that Kimmy's going after Clint. heh..so SOAP!! Reminds me of the old Asa highjinks! woot!! Rex..talking to Jessica! Destiny's eyeballs when Dani told her to wait in the hall. Heh. I'm also glad Sky told Gigi that the baby is his (even though it's not)--and why would Gigi get all militant on his ass?
Dani: GET AWAY FROM MATTHEW!!

GENERAL HOSPITAL: OMG, DOMte..get off the DOCKS when you are listening to your secret footage!! Good Lawd!

I'm already a bit sick of the tortured artist. I'm trying--I'm trying. I just figured it out though. The entire story is a total HOMAGE to St.Jason. I think Franco is Guza..worshipping Jason!! Just sayin'.

Maxie's top was so cute today.

I wish they'd mention Ruby's chili. BINGO! thank you writers. :) Wow, they are trying hard with the whole OlSon thing aren't they? DOMte, put 2 and 2 together, will ya!?
So, does Zander come back to usher Rebeicly into heaven?? Hmm...maybe he and Emily do? (David suggested that). I do think that's what happens after reading spoiler stuff. She leaves Dec. 22ndish--he's on Dec. 22ndish...so it figures.
A few new spoilers are up WUBSNET please hit an ad to help the Toys for Tots drive! THANK YOU!
By kdmask - November 30, 2009
Email ThisBlogThis!Share to TwitterShare to FacebookShare to Pinterest