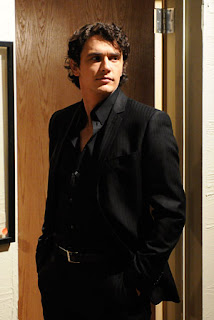 The article is up on MOVIELINE...here's a bit of the interview, read the full one by clicking on the link:

When General Hospital announced that James Franco would be joining the soap opera for a lengthy story arc, pop culture pundits couldn’t fathom the movie star’s motivation. Over here at Movieline, though, we sensed the guiding hand of Carter, Franco’s frequent artistic collaborator. The two men have embarked on a wide variety of art projects that play with and deconstruct Franco’s image, including a VMan photo shoot that handed the actor a flamethrower and covered his face in shaving cream, and Erased James Franco, a 63-minute film (playing November 15 at the Castro Theater in San Francisco) that finds Franco idiosyncratically recreating Rock Hudson from Seconds and Julianne Moore from Safe, as well as some of his own lesser roles.

James is playing an artist who’s obsessed with another actor on the show. Is that an intentional stand-in for you, in a way? Another layer of meta?

Is it intentional? No, I don’t think so. Actually, I don’t know the full nuts and bolts for how that character came about. The idea did originally come from James and I and our collaboration, and I’m sure that colored the development of the character.
Some people were horrified by the idea that he would do this. They regarded it as career self-sabotage.

People are very critical. Obviously, someone like James Franco — someone who’s not starting out — does not necessarily have to be on a soap opera. I think this notion of “Why would he dare do something like that? It’s a career killer!” is silly. Liz Taylor was on General Hospital, for crying out loud! For James, it’s much more of a challenge, and that’s to his credit. It’s a challenging thing to be on a soap opera — it’s a lot of work, it’s a lot of memorization. In the context of him, again, this is not something he would have to do, but it’s something interesting to him. I take the credit…but that’s why I work with him, too. He’s open to doing other things.
By kdmask - November 13, 2009
Email ThisBlogThis!Share to TwitterShare to FacebookShare to Pinterest