Well, the Holly-Story wrapped up with a few good surprises this week!! It ended up being very satisfying in the end but of course, not long enough!  We also had Thanksgiving, Esme Tower Drama, Spencer in Prison, Ryan and Heather in the same room and Wilting Willow.  A bunch of other stuff was also thrown in as usual so let's go go !!

Settle in for some tea and scones while we discuss... 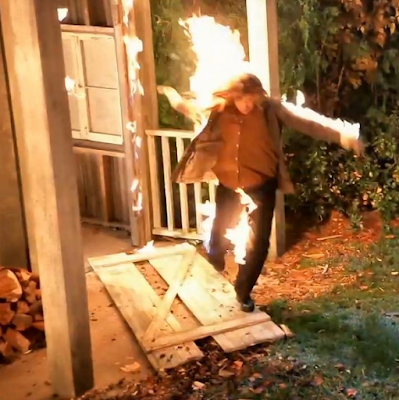 BIG BANG OF THE WEEK:  Holly drugs Robert, heads out and takes Laura by gunpoint, manages to get to a cabin in the woods and comes out on fire. This was all in the beginning of the week! PHEW !! Most of us were hoping Robert and she were in on a big old "Sting Operation" and boy oh boy--were they!! The only people that knew were: Holly, Robert and...FELICIA! They even kept it from Mac and Laura. :Clapping:  I thought for sure it had to be a plan they had but it kept me guessing for sure. That's good writing. Also leaves the door open for Emma to come back again! 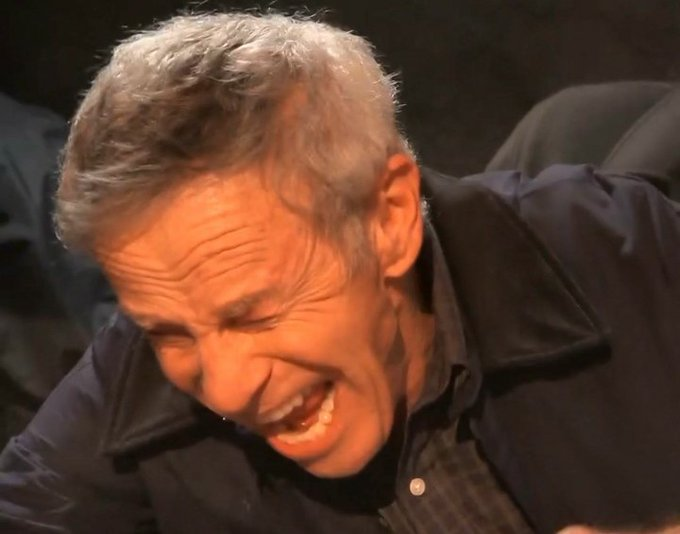 ACTING OF THE WEEK: Robert sure did do a good job convincing everyone. Even had me for a minute there! 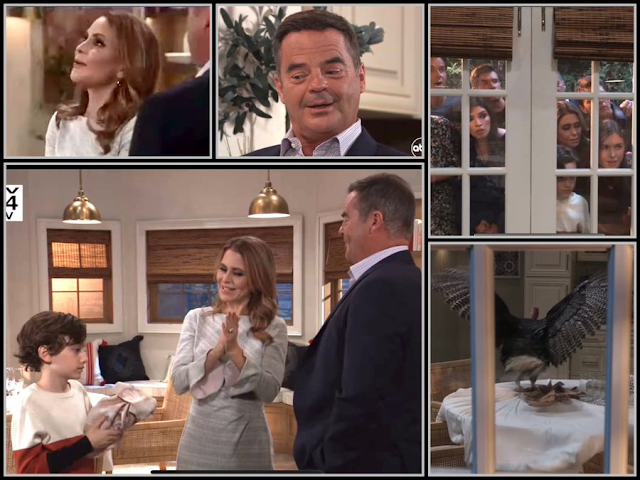 TURKEY DAY:  Thank you to @NivFans for this collage of goodness that happened on Turkey Day! A real turkey was loose!! Leo did a great job with his part and was so convincing LOL. It was a good twist on the old Pizza Party. Guests included: Brook, Chase, Carly, Drew, Ned, Olivia, Michael, Willow and Leo. The kids were in the attic. Heh. BTW, I wonder how much that turkey cost?? 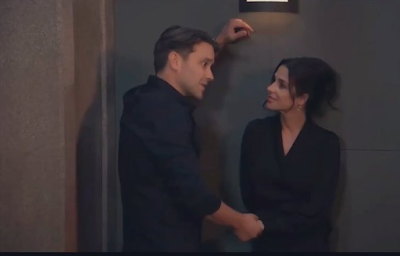 TURKEY DAY TWO:  Sonny also hosted a party with Nina, Gladys, Sasha and Sante. Sam and Dante spent the entire time making out in the hallway and there was a lot of Brando talk. Nina got some diamond earrings. Gladys made plans to go gambling. 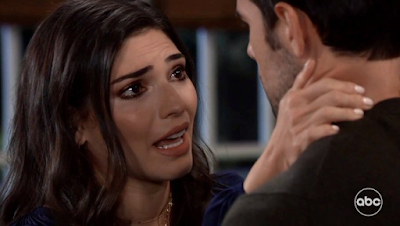 THE PAPER CHASE:  He lost his appeal and Brook didn't get her letter in on time. Chase is angry, breaks things off. Brook cries to Dante and Chase talks to Sasha. Brook finally decides to call someone for help. I was thinking Gram Tracey but I think she's still wanted by the NYS police so maybe it was Ned?? Hmmm.. 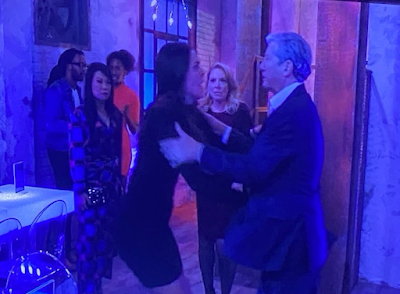 SAVOY DRAMA:  N'neka is serving up the drinks and all sorts of hell breaks loose!! Britt is there stumbling all over and everyone things she's drunk.  Victor figures out she has Huntington's like her Dad. Great acting by all. I really wish there was a follow up to these scenes though.  They really missed the mark by just cutting it short and going to the next day, imo. Britt wasn't even shown after this. 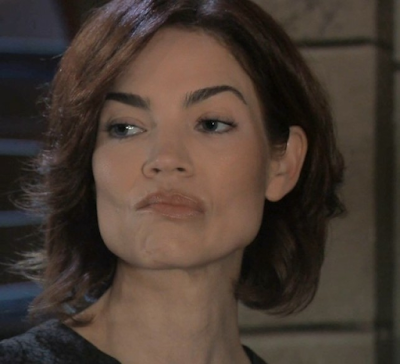 DARK ELIZABETH OF THE WEEK:  MY Favorite part of the week was Elizabeth !!! Spectacular use of Becky and perfect for what is happening right now. It also gets her her the hell away from Finn, thank you. Love how she threw the sex video in Esme's face. Love how she's keeping the secret. Delicious. SOAPY. Wonderful. 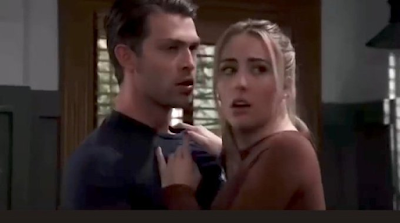 MICHAEL'S "PLAN" OF THE WEEK:  When this whole thing started, I thought --oh!! Michael pulling a cool plan over on Sonny? Might be interesting. Now? WTF!! This is just..tedious and I can't for the life of me figure out WHAT Michael is trying to do! If he wants Sonny in jail he certainly has enough proof now.  I mean? WHAT IS THE PLAN???? I don't think even Michael knows at this point. Now, it's morphed into a plot device to keep the zexy love-birds apart!! Please make Michael at least appear to have a brain cell. 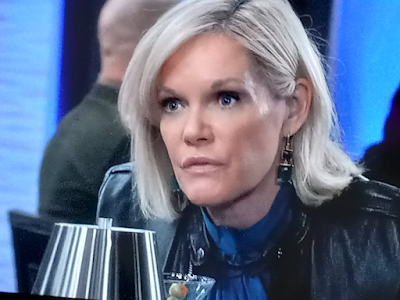 AVA OF THE WEEK:  To help Trina, she agrees to talk to Ryan about finding Esme. Even knowing Esme could blow her in for the parapet deal. THAT'S a loyal badass right there! 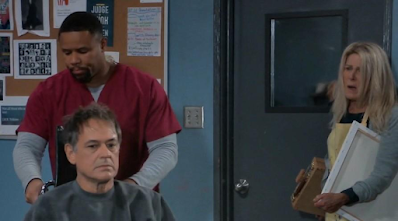 GLARE OF THE WEEK:  I hope you caught the Ryan-Heather exchange !! Oh lordy!! He turned around and BOOM!! There she was and there was a moment..a definite MOMENT PEOPLE!! I think she's Esme's mama. Don't know how, don't care how. Squee!! Delicious!

UNCLES OF THE WEEK:  Victor tries to broker a meet and greet between Nikolas and Spencer. Spencer is having none of it and surprises Uncle V with a guest of his own. Cyrus comes in and--welp, it appears Victor didn't know Cyrus was Laura and Martin's 1/2 brother? WELP! 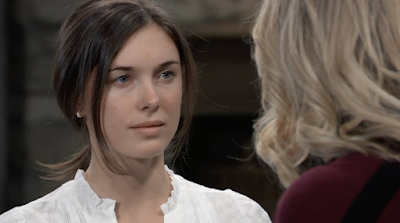 WOBBLY OF THE WEEK:  Oh Nina... you go over to 'do a good deed' for Sasha (um, okay). Willow is way mad that Nina would even suggest she help Sasha decorate the square. Granted, Willow just had chemo but Nina doesn't know because she refuses to tell anyone!!  BUT! Willow gets all upset, Carly marches in and... Willow faints. No one calls 911 and eventually she gets back on the couch.  Carly takes Nina out to talk with her and in a surprising turn, is pretty chill about the whole thing and tells Nina to just leave.  Are they trying to make Carly a bit softer now so we don't think she's the annoying boil she is?? Hmmm... time will tell! 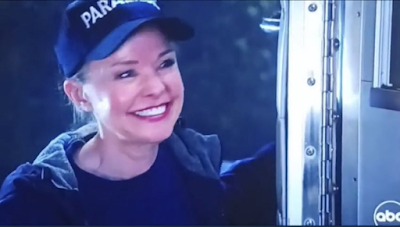 FACE OF THE WEEK:  Oh! Felicia was SO happy SO SO happy to help with the whole Holly-Scam!! 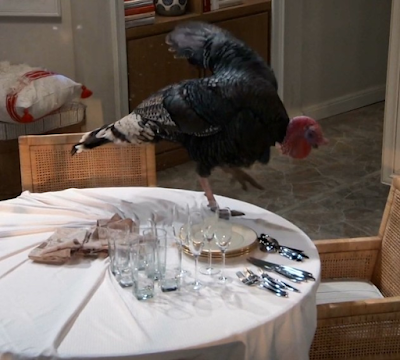 There's a Turkey loose!! Ergo, Pizza at the Qs!

Gladys makes a call to join the gambling game

The Holly Plan unfolds:  She fakes her death and Robert gets the necklace

Wu gives Victor a dose of something Holly left

Joss and Dex get closer even though Michael said NO!

Nina tries to get Willow to help Sasha, Willow erupts and faints

After 3 Xanax, Carly is actually civil to Nina

Drew and Carly decide to hook up in private ... insider trading be damned!

Portia wants Marshall to get retested for genetic markers

Victor and Nikolas visit Spencer in Jail.. it goes wrong and Cyrus shows up

Heather tries to get Scotty to help her get out of jail; he says NOPE

Mac and Kevin get Ava to agree to meet with Ryan

Ryan and Heather have a "moment" at the Spa Jail 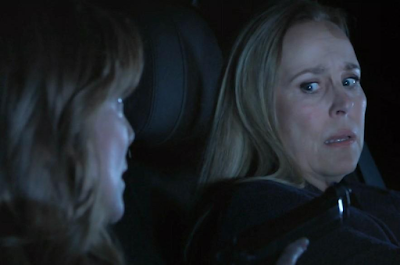 That's a wrap! I don't even think Laura was in on the plan!! They talked in the car like Holly was really doing this and they didn't need to!! SO.. there's that! It was a good week overall and it really did have a TON of things happening. We also got a Scotty Heather scene that was fun. I'm really liking the Esme Tower Drama because it's so old-school soapy. Back when no one really cared about "repercussions" --things just happened!!  They are def making Victor more of a threat as well, especially showing him shooting Paloma. The Joss/Dex thing is also Soapy 101 and although I don't like the "look" of him, the concept is there. Willow's cancer drama better pick up and please let the town know she's ill. Just do it. The biggest drag for me now is the whole Portia/Curtis/Marshall drama. I just don't care. Oh, I do like Alexis being a fly in the ointment over the Hook story. WHAT HOOK STORY? ahahaha. Someone better get murdered and quick!

Have a great weekend and I'll see you all next week.

By kdmask - December 04, 2022
Email ThisBlogThis!Share to TwitterShare to FacebookShare to Pinterest