I SEE LONDON I SEE FRANCE

SO Josh Kelly arrived LOL . His name is Cody and Dante knows him. HE arrests Cody. BUT He was hired by the event to drop in the pool LOL (SPIN did it). Anyway, Dante lets him think he's taking him to the PCPD but they go to Charlie's instead. They drink beer and talk. 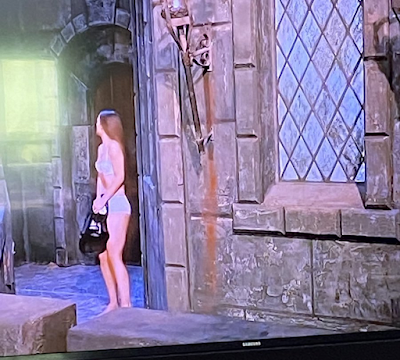 Door is LOCKED to the den so Spencer and Ava can't get in. Damn it. OMG Esme runs to the Parapet in her UNDERWEAR! AHAHAHAHAHA. Ava and Nikolas talk..she totally knows what happened. Esme gets dressed. Nikolas talks to Ava and says he 'must have fallen asleep and the DOOR BLEW SHUT"!! hahaa. She doesn't believe it. Esme drops her shoe out on the parapet. Nik says it's BATS!! AHAHHAA. Ava tells Nik she isn't leaving, she's sorry. Oh she HAS to be playing him, right? I mean. She HAS to know. Doesn't seem so. She talks about Laura and her talking to her about Avery's letter about preschool and how she wants to try again.

Spencer meets Cameron at the door. They are trying to figure out where Esme went. Cameron is like "I have problems of my own"! Just tell Josslyn already! DO IT Tonight..either get Esme to confess to tell Trina what you're doing.

Carly of COURSE didn't tell Millow about THE DNA test. Drew is there, wonders how things went.

Drew and Michael talk about ELQ. (BTW Chad Duell will be back filming GH ..he was out COVID related) Michael wants to destroy Sonny.
Carly and Willow talk. Willow says that she HATES Nina so much. Carly just stands there. She puts the test back in her purse. She's not telling.

Sonny goes to talk to Phyllis. Things were SO MUCH MORE SIMPLE in Nixon Falls! You know, neighbors helping neighbors yada yada. Scotty calls and tells Phyllis that Nina lost. He wonders if she's ok. Phyllis says she's not there. Sonny is concerned. Goes to Nelle's grave... she's not there.

Joss is with Wiley in the park..he's like SIX LOL geesh! He and Joss go on a "mission" Oh she takes him to the courthouse.

Spencer finds Esme she says she has something to tell him.

By kdmask - June 02, 2022
Email ThisBlogThis!Share to TwitterShare to FacebookShare to Pinterest