Ok, that was Tuesday 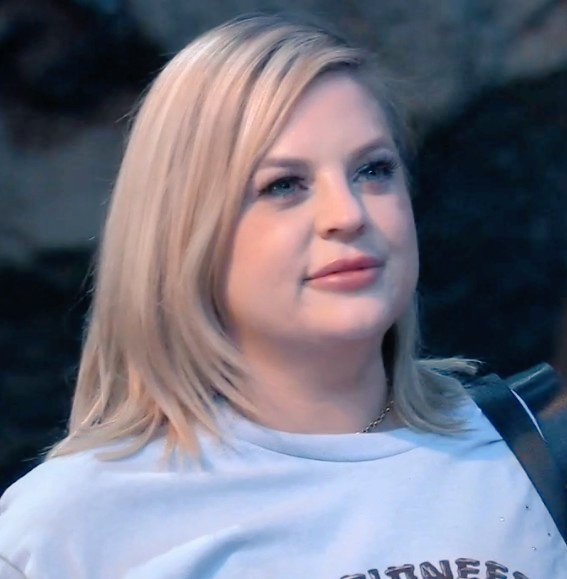 Yesterday's SHOW? WOW.. and not in a good way. EEK..The only thing I liked was the Watkins Glen reference. :) Great place.

There's some weird plug for a Hulu show? Or a cereal? I don't even know..just WEIRD. Chase is eating it.. ??? Oh someone on Twitter said he's a NBA star? LeMelo Ball or something?? I guess HULU is having NBA GAMES?

Anyway, Chase then goes to the pool to meet Brook Lynn. Apparently the pool is open at night. Brook Lynn wants to keep doing music. Linc is talking to Selina WU. Then Chase distracts Linc and Brook Lynn rifles through his coat and finds Wu's business card with the password for the gambling game. 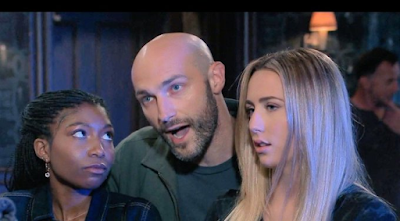 Tri and Joss goes to this dive bar in the middle of Port Charles. AHAHHAHAHAA. OMG. The extras are hilarious. Guy asks them for ID. They have fake ones: Jane and Kara. The bouncer knows they are fake. Ut oh!! Then they offer cash to talk to the guy who sells burner phones. He shows them that he's behind the bar. They ask to buy a phone but want to make sure he has the right kind. "Our friend bought one here"--and they ask if he saw Esme. He says he did. Some bald guy comes up to the girls, recognizes them from the news-- knows the sex tape and that Trina's Dad is a cop. He calls Joss The PCU campus porn queen. Fight breaks out

Camping: Just boring and SO.. so.. terrible. There I said it. Ooooffff. Maxie and Austin are not even watching ANY kids...and goofing around about stupid shit. Finn's all exasperated about the TEEN KIDS :eyeroll:  They hear something. Oh it's Violet and Greg walking through the woods. Cam and Finn make up. Music is played on a guitar.

Sonny and Nina. Same ol convo they've had for eons. Yada yada. Nina is upset that Dante is ignoring them. Sonny wants to go somewhere more comfy. So they go to CHARLIES? FFS. Okay.

Curtis and TJ talking about Marshall and if you don't know, TJ is not bio-related to Marshall. He just met him too--and I mean, Shawn is his Dad so..?? this makes little sense. I get he's concerned but...anyway, Wu comes up and talks to Curtis about the gambling game.

Cody is listening to Spinelli and that lady talk. He thinks Spinelli and she are having zex... and wants to blackmail Spinelli???

Cam and Sam sing a song.

Austin and some guy (we don't see his face) talk in the woods. I think it's Victor or Valentin about the Qs

Cody gets money from Spinelli and he goes to gamble it

Police come to the fight at the bar.

By kdmask - June 15, 2022
Email ThisBlogThis!Share to TwitterShare to FacebookShare to Pinterest