Everyone is talking about the Q meeting today and the picking of CEO and merger. Olivia and Carly at the pool, Valentin and Martin at the pool. Q house: Willow, Drew and Michael. They think it's going to go their way.

Drew and Dante have lunch at Kelly's. Dante wants to know how it happened he got beat up and when he's off their couch. OMG Dante fills him in on Britt and her past with Rocco!! ahahaha!! Then he mentions Faison being her father and wow... Cody reacts big time.

Jordan and Linc talk at the PCPD about the charges against Chase.

Brook Lynn is worried Chase will lose his job (they are having coffee outside of Kelly's) . Chase is called into talk to Jordan.

Britt and Brad talk about Cody. He knows who beat him up. LOL..Mr. Li from the WUS! Britt almost tells Brad about Huntington's but she's called away.

Q house.. Lucy and Ned come in. Drew and Michael are getting ready for the vote going their way. Martin calls Lucy and we find out she only votes if there's a tie. So you know there will be a tie.

Martin tells Valentin that Laura is trying to get Victor deported !! Damn it, Val will tell him!

OMG CARLY SOLD HALF THE METRO COURT to buy her stocks!! ahahahahaa I think Olivia owns the other half!

Willow almost faints on the stairs.

THE VOTE: it's a tie! So Lucy will have to break the tie! Carly will lose everything and I hope the financial company holding her hotel money is AVA's!! ahahhhaa. 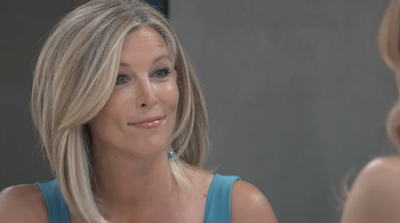 GOOD SHOW TODAY to take your mind off everything going on. Watch it.

By kdmask - June 24, 2022
Email ThisBlogThis!Share to TwitterShare to FacebookShare to Pinterest