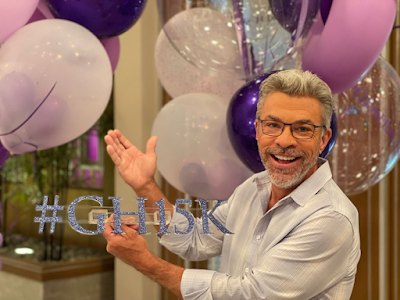 So.. I neglected to say on Sunday Surgery but GH will be interrupted this week on Tues/Thursday due to hearings. ERGO the 15,000 episode will air WED instead of tomorrow. (It was already moved because of the hearings last week). LORDY!! SO complex LOL

Laura and Marty are at the Metro Court patio having dinner. Flea and Mac come up but don't join them. They say they will when Kevin comes later. They go to another table. Martin tells Laura that it wasn't Cyrus that ordered their deaths. Laura says she knows it was Victor. Then she tells Marty that she thinks he also had a hand in killing Luke. She also says she's talking to people in DC about getting Victor deported LOL

Felicia tells Mac she gave Ryan a "dressing down" and he's pissed. She says she had to do it because he cant' hurt anyone anymore. (UT OH)...

Felicia and Mac sit with Laura and Kevin-- and Felicia lets it drop she saw Esme with Ryan. KEvin gets pissed. He's going to go check to find out how Esme got around his orders not to go to see his brother.

Victor is going into Kelly's and ask Spencer why the hell he's working when he got his money back. Spencer says he was helping Cam out. He says that he's staying at Wyndemere with Esme. Victor is surprised. THEN Spencer says he's going to find Esme's biological parents for her!! "She'll be so grateful, she'll do anything"!! OOOOO!! Spencer agrees to help find Esme's bio parents.

Anna knows that Valentin was trying to pump her for info on Jennifer Smith and that sea captain guy. They talk more about him being absent and he says he's very serious about her and his plate has been full lately. They kiss. She gets her popcorn.

Trina is on the phone with Joss. She's unlocking the door saying how much fun the night was and giggle. Then she opens the door and Taggs, Portia and Curits are waiting for her! GULP! Oh it's just about her Title 9 decision. They were worried about her but she's all cheerful. They wonder why. She says she and Joss thought of another avenue to look into about Esme. She tells them all about the bar. Taggert freaks out LOL . Portia is going to order pizza. Curtis is left to talk to Trina alone. He says she did exactly what he would have done. Oh, little daughter/daddy bonding time???

END:
Kevin tells Esme he got her fired from working at the prison place.

Alexis calls Laura and says something terrible is happening tomorrow and she can't stop it. THIS WILL be the Laura-centric show and I think it airs on WED due to the hearings.

Esme goes to see...Kevin at his office! She got into PCPU Psyche program and has to do a case study and she's doing it on RYAN! Kevin is like @@~~~!! "It's too dangerous"!! She asks about attachment disorders and if Ryan has ever had an attachment to another, like his twin. Kevin says no, he's a psychopath and took  over his life and killed people. She asks if it's genetic. She says she has attachment problems, no friends yada yada. Kevin says that Ryan is way more horrible and no, she's not a sociopath. WATCH THIS CONVERSATION because it's hard to explain but I think it will be important for the future.

By kdmask - June 20, 2022
Email ThisBlogThis!Share to TwitterShare to FacebookShare to Pinterest