I have SO many things to say. SO MANY. It was just a week that frustrated me. We had a Drive-In, Ice Cream, Ice Water ... horse talk and a whole lotta chem tests to get through.  On top of all that, we were interrupted by the hearings. Summer's looking choppy people!

I can tell you what...the Japanese popcorn Valentin served Anna is not on my menu.

Photos thx to @Here4Sprina this week! 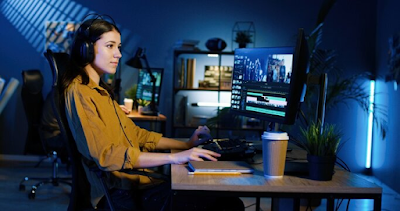 CHOPPED EDITING OF THE WEEK: I'm getting this out of the way. First, Temp Recast Michael is on again...after he was on the first time and then Old Regular Michael was on for a week with the horse stall stuff. This takes place at the pool, talking about ELQ Stocks where they were talking before. OBVIOUSLY it was filmed at the same time but-- ? What? If I didn't know what was happening, I'd be SO confused. They never re-announced the temp recast so?? And if that wasn't weird enough, Carly tells Drew at the pool she hasn't talked to Sonny yet (after the hearing) and YET WE HAD A GIANT scene of them talking in the office together. She even had the same dress on she had on all week. I'm just. And yes, I realize it takes a ton of work to put on a show but damn it, edit better. 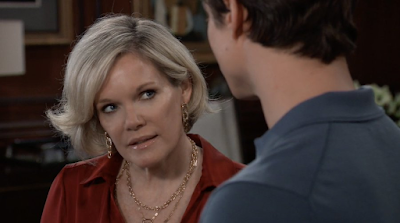 CHOPPED AVA:   *sigh* You're making  one of my fave characters into something that's just a bit pathetic. She's ruthless and smarter than ANYONE in that room (maybe the entire town) and she can't figure out the Nik/Esme sex? REALLY? REALLY? One talk with Laura and it's "I LOVE YOU...let's work all this out"?? BLAH UCK and NOPE. 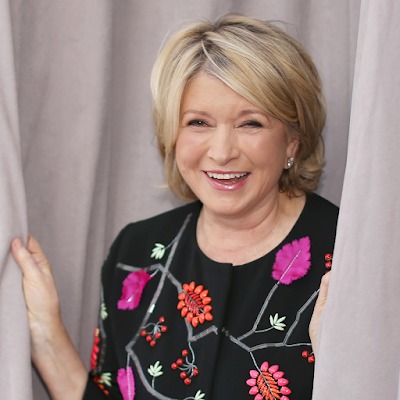 CHOPPED STOCK BUY: I'm no expert but Carly's going to be Martha Stewart soon because you bought up stocks KNOWING there may be a merger BECAUSE OF YOUR SON. 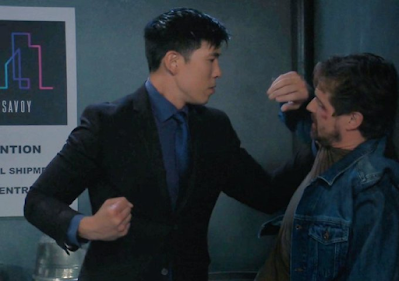 CHOPPED CORY:  HE's a card shark, took everyone's money and Ms. Wu was pissed. He got beat up by Li.. and then helped by Britt because...chem testing. That's all you need to know. 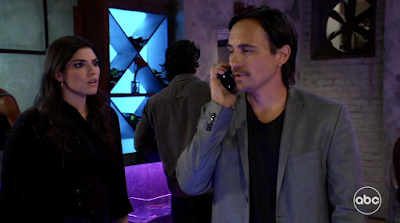 CHOPPED LINC:  Chase smacked Linc in the kisser and now he's arrested and I don't think he'll ever get his PCPD job back. That's all you need to know. 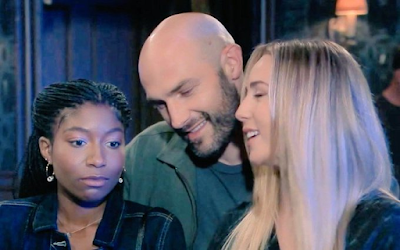 CHOPPED UP BAR:  OMG ..first of all, my fave part of the week. Trina and Joss go into a "Dive Bar" that is SO Nixon Falls Tan-O it even had the juke box in the same place!! ahahhaa. I loved the extras they hired for these scenes. Great stuff. The bouncer and the bald guy were especially believable. Anyway, the girls cause a fight when they try to find out if Esme bought her burner there. Rory lets them off with a warning. Oh, and their fake ID names are Jane and Kara. As someone said on Twitter, "Jane and Kara" need to go on a summer on the run story!! YES! 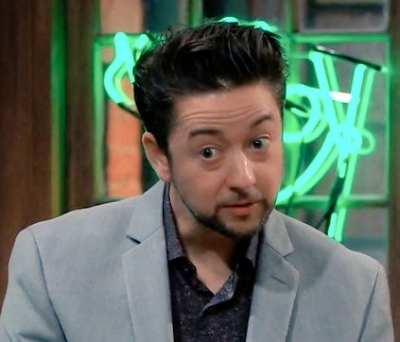 CHOPPED UP SPIN: Spin can't help Tross with the PHONE THING? WHAT? I seem to remember him IDing a perp for Jason from 34 months ago on some grainy footage taken from a video camera AND finding out the IP address. So.. this was just  baffling. 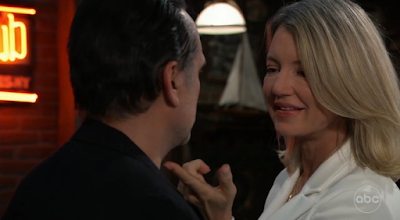 CHOPPED UP CHEMICALS: I'm putting these all together. The Drew-Carly and Nina-Sonny scenes were just so.. dull. SO SO dull. I could have watched an hour of Tri and Joss--or an hour of Elizabeth (remember her?) Or Ryan..or Esme buying shoes. They talked about NOTHING and they did it for ages. I'm so sick of the Michael/Wiley saga I could gouge my eyeballs right out. WE get it: Sonny's on the outs with his family, he's taking comfort in Nina and I guess Carly has to have a man around because....Carly. At least the Britt/Cody stuff was new and different. 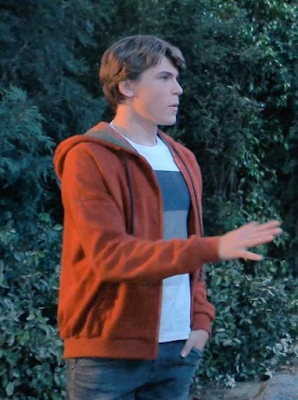 CHOPPED UP S'MORES: Oh boy oh BOY!! CAMPING!!!!!  I guess I can include Maxie and Austin in the chemical mix. I did think it was hysterical that Maxie went to the camping trip even though Georgie was on a sleep over and not even there. Pffffffffft. Aiden, Jake and Cam made it but Elizabeth is stuck in Shadybrook. Because... GH. I cringe with the singing. It's just not my cup of tea. Sam the camper kid from OLTL? Meh..ok, I guess I get it. Nostalgia. BUT--then on Tuesday we see Austin talking to some rando guy in the woods we have no idea who it is and they don't show him again. That happened Tuesday--even with the interruption it means they skipped it for 2 days. How to kill Momentum 101 and yes, I blame the editing. 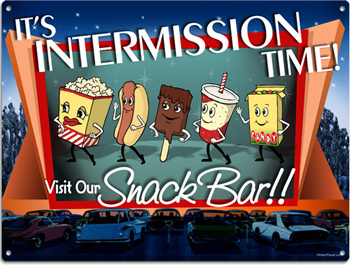 CHOPPED UP SNACKS:  Valentin is all cute taking Anna to a drive-in. He doesn't know what snacks to bring and has caviar and some popcorn from Japan that I think is edamame flavored. While I appreciate seeing these two together, their last interactions (here and at the gun range) have lacked the charm they used to have. Just stilted. OH! And by the way, I guess we are bringing up Jennifer Smith and Luke and Valentin dressing as that French Sea Captain guy! Please search  your memories for that --because it happened many moons ago. 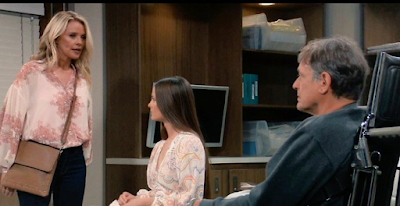 CHOPPED RYAN:  Esme/Ryan and Felicia. Great scene and really lacking in depth and follow through. I'm sure more was written than what we saw. Again, I think Ryan should be transferred to Shadybrook and maybe Poor Liz will be written into some stories.

CHOPPED UP INSERTS/TOPPINGS: I'm going to add these because they were just rando insertions. Jordan and Sonny: Um...??? Okay?? WHY? To talk about sons? So he could cry to yet another person about that situation?  Lucy at the pool; asking her to buy stocks--then..nothing. Valentin and Marty at lunch talking about ELQ...? Why did I think Martin and Lucy would then be together and talk about the whole thing? Spinelli...Zelda...Cody.?? Um.. you're really not even remotely explaining why Spin wants to keep all of this a secret. Was all of that just to get Cody some money to do the gambling scene? I would have rather have watched Spin and Zelda talking and letting us in on this big "mystery". TJ and Curtis talking about Marshall. AGAIN.  Could TJ please maybe TALK TO MOLLY ABOUT IT??????? 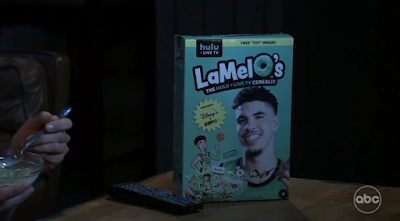 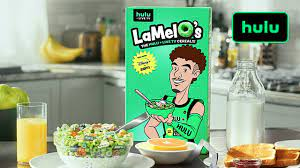 THE BIGGEST CHOPPIEST INSERT WEIRD-ASS'D THING OF THE WEEK:  WELP!! SO, in an opening scene we get Chase eating a bowl of LaMelO's while watching the NBA. I also noticed the HULU reference on the box so I guessed it was a tie in with the network. I dug a bit (because no, I have no clue who this person is) and come to find out he's LaMelo Ball an NBA player for the Lakers. There's a Hulu "Sellouts" thing going on and I don't get it but there you go. I'm sure this appeals to GH's demographics. :shrug:

Drew asks Carly to skinny dip (she said no)

Camping with angsty Cam and the kid gang. Singing ensued

Austin sees someone in the woods.

Nina helps Sonny not be sad

Chase decks Linc and gets arrested

Tri and Joss find the guy that sold Esme the burner phone; a bar fight erupts; they don't get arrested

Spinelli is blackmailed by Cody who overhears him with Zelda

Valentin and Anna go to the drive in. Anna gets no good snacks

Felicia warns Esme that Ryan is a lunatic

Ava and Nikolas think they need to divorce to start over

Esme says she has something "BIG" planned for the Cassadines

Cody wins at poker, gets beat up by Ms. Wu's guy and loses most of his winnings

RebeccaHerbst
@RebeccaLHerbst
Well, hello there…just thought I’d shut down some rumors that have been circulating: I haven’t been fired. I’m not on vacation. I don’t have covid. My kids don’t keep me from working. Nor do I have cramps (the best one yet

NEWS AND NOTES:  Becky took to Twitter to dispel some of the rumors about her role as Elizabeth. Since the story seemed to turn on a dime and she's suddenly gone, many people were wondering WTF happened.  We still aren't clear on WHY-- or WHAT but there you go. Not her choice. Not our choice. And... we ma never know.  Just a shame. 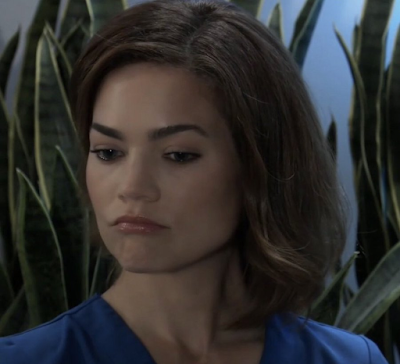 SPOILERS:  Esme tries to catch Rory's eye because you know, he likes Trina--- Sasha goes on Home and Hearth and it's a disaster,  Cody arrives at the Qs stables and Kevin visits Elizabeth. 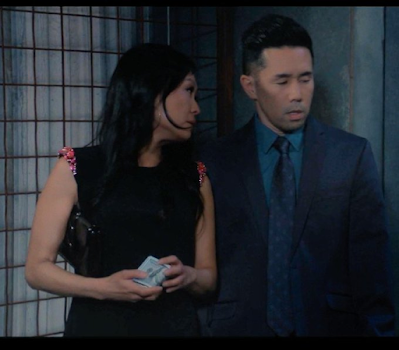 And that's a wrap!! GH has been dragging time lately. Days last weeks and this week lasted an evening and into one night. You could tell by Carly's distinctive dress. Sigh. Anyway, I really tried to get home to catch the show and wasn't wow'd. Not even close. 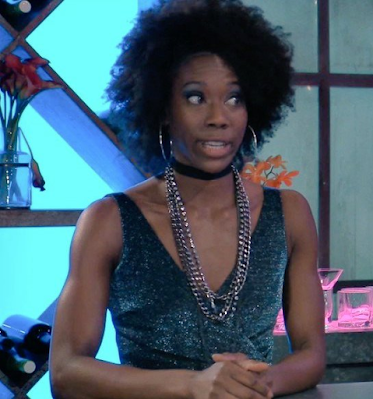 See you this week. It's my last week with kids. Monday in Juneteenth so I have no meetings scheduled. I think some of the hearings will interrupt GH this week again. So it goes.

By kdmask - June 19, 2022
Email ThisBlogThis!Share to TwitterShare to FacebookShare to Pinterest