IN My Shoe Box

Nina and Ava day drinking at Charlie's...talking about the Wiley mess. Ava tells Nina that Smaltz interviewed her about the "Avery birth" LOL!! Where NINA  induced labor and stole Ava's baby!! AHAHAHHA. Nina says she's worked hard on herself since then. AMy comes in all upset about the Nail Salon and Terry and sits with Ava and Nina after they ask what's wrong.

Spencer and Cam talking at Kelly's. Spencer says he's found nothing on Esme. AND he's not sure how he can keep from not having sex with her. Oh geesh. I miss the 70's. Anyway, Cam is going to let Spencer go early so he can look for evidence while Es is in Yoga class. I bet he finds the letters. 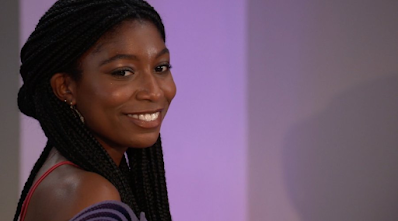 Trina and Joss go to Yoga and Rory is there.. he's making googlie eyes at Trina. They can't date yet because she's going through a court case and he's a police officer.

Esme is in Wyndemere and got a letter from her nanny, Maggie saying she's happy that she and Spencer are close. We see Ez and Spencers room/suite at Wyndemere. It's nice! She hides the letter in her shoe box in the closet.

Terry and Chet on a date..awww.. Very cute dialog. She looks so pretty. They are at the outdoor Metro restaurant. They talk about how they were afraid to tell each other their 'secrets': Prosthetic legs and her being trans. They are glad they told each other.

TJ finds out that Marshall was put in a mental hospital. TJ thinks that Curtis crossed the line in finding out. HE's going to find him and bring him back.

Carly's being all snotty to Valentin. Says it's HIS fault that Nina didn't know Nelle wasn't her daughter because he passed Sasha off. Val rolls his eyes.

Curtis and TJ talk about..MARSHALL and-- you know. Anyway, TJ thinks Curtis should find him.

Amy finds out that Terry and Chet were out for drinks...

Spencer is looking for evidence against Esme in her room.  He finds all of her nanny's letters.

Cam and Avery hug and Joss catches them. (Cam was pretending to like her)

By kdmask - May 09, 2022
Email ThisBlogThis!Share to TwitterShare to FacebookShare to Pinterest