GEORGIE FOR THE WIN

Liz and Finn make out in The Metro. Cam calls because he's concerned. Liz says don't worry, Finn is there. They talk on the phone to their kids. Finn leaves. Tells her to lock the door. She doesn't bolt it from the inside. A little bit later she walks out in a robe and yells FINN!! Someone was in the room (Or WERE they)?? He comes in..the entire room is trashed. Liz says that she was in the shower and it happened. Um, HER HAIR IS DRY!  Anyway, Rory and another cop comes in and he asks about the inside latch. She says Oh no! She forgot. Finn says it has to be someone with a key card.

Lucy sees Martin in his room at The Metro. She's naked under her fur coat. They talk about The Deception launch. He still doesn't want to tell Valentin about their relationship. Lucy wonders why. Then he decides he will go public, doesn't care about Valentin's reaction. He can't get another "Lucy".

Valentin is talking to someone on the phone and will "do the plan no matter what it takes". He sees Lucy and Martin together. Martin says he's dating Miss Lucy and if Val doesn't like it he can take his business elsewhere. He says that he's happy for them and will keep Marty as his lawyer. 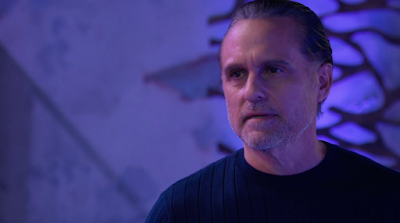 Sonny and Nina at the Savoy (YES! Same night!!) she tells him about Harmony. Says he should go to the hospital. He says NAH..Michael doesn't want him there. He and Nina dance. AND DANCE...and...that's it!

Harmony opens her eyes and TJ checks her over. He says she's awake but shouldn't be stressed. Willow wants to go in. He says she can go by herself. Carly looks like she's afraid Willow will stress her.

Willow goes in. Harmony says "I'm sssssssoooooory" ..they talk about stuff. Harmony croaks "I have to tell..."then she starts coding. Willow goes out and begs Carly to JUST TELL HER what her mother is trying to say. Carly won't. All Harmony needs is a sedative. Willow and Michael go sit in the lobby (weird) CARLY goes in to talk to Harmony and says she didn't tell Willow about the whole Not her mother thing.

Maxie and Austin talk about going out again tomorrow night and she doesn't want to have to get a sitter again. He says that it's kind of like "Med SchooL" and she's trying to get out of going out with him again. He says maybe she's not ready for someone new. Then Maxie grabs and kisses him. Then Georgie comes out and is like "MOMMY WHO IS THAT GUY"?? LOL

END:
Liz wants to get in touch with a medium.

By kdmask - May 03, 2022
Email ThisBlogThis!Share to TwitterShare to FacebookShare to Pinterest