I can't even remember what today is!!

Sonny brings his muscle car in for Brando to take a look at. Brando says Mike worked on cars with him. They hang out and work on the car. Talk about Michael. Spark Plugs.

Gladys confronts Sasha over the pills. Gladys is more concerned about Sasha's health than Deceptions stock. Says if she doesn't do something she'll tell Brando.  Sasha is still trying to talk  her out of it. Gladys tells her she saw ALL the photos on the guy's camera. Sasha is like: GULP. Sasha is talking about her drug addiction-- and she swears that she didn't  take pills when she hit Harmony. She swears on her son.  Gladys says she HAS to tell Brando. She says she knows the signs. Brando was an addict. so...he might fall off the wagon. Sasha PROMISES she will quit.

Curtis and Portia hug in her office at GH. She's upset about the PCPU report on Trina. Marshall hugs her. Tells her he's leaving to find Marshall but won't go if she wants him to stay. She tells him to go but what changed? He says he found out that Stella and his mother lied to him and they knew Marshall was alive. Jordan then comes in and tells Curtis where TJ is--and they are looking for Marshall.

Link, the evil music producer crashes Leo's party. He owns ALL OF BROOK LYNN'S SONGS!! Oh the ones she wrote when he was her producer. He's been shopping them around and people are interested. He wants her to sign with him again.  Anyway, it goes round and round and Chase is almost going to punch him but Brook does first. 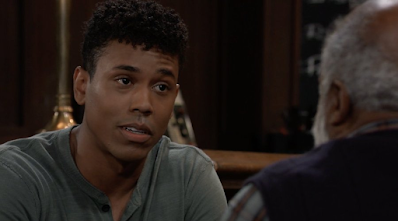 MOLLY is in Brooklyn with TJ!! WOW..they are meeting the music store guy to try to find Marshall. Guy comes in says he told TJ he doesn't know Marshall but will take dinner anyway. He does recognize the clarinet but doesn't know where Marshall is. BUT HE does know Marshall...they catch him in a slip up. He says he'll keep an eye out for him. Orders Cherry Pie LOL

Marshall walks into the restaurant and sees Molly and TJ

By kdmask - May 18, 2022
Email ThisBlogThis!Share to TwitterShare to FacebookShare to Pinterest