A Key To The Castle

I tell you what.

Here's hoping I last the next TWO DAYS!

Liz and Chelsea. Chelsea's all upset..shaking..Liz is telling Franco to "contact" her... Finn's trying to call. . we are looking "in the window" (not sure it's us or someone out there) and in the end, the window blows open and blows out the candles. Sorry, it was the door. Chelsea becomes someone else. Franco. He basically tells Liz to believe in herself and yada yada. I think he's trying to tell her She's doing these things to herself. Then, of course, Finn and Laura walk in. Liz sounds a bit cray talking about Franco and such. Liz goes to stay at Laura's. Finn lays into the medium. Tells her to stay away. Chelsea says that Liz needs help dealing with whatever she's going through.

Spencer goes to see Britt about the pill. She makes him talk in his little kid voice and tapes him. Pretty funny. He shows her the pill. She gets serious: WHO'S IS THIS? He says Esme's. It's an opioid and has big side effects too. He asks about mixing it with alcohol. She wants to know exactly what's going on. He won't tell her. Then he gets all snarky to throw her off suspicion I think?? He's mean. Tells her she never had a real realtionship so she can't tell him what to do about Esme.

Esme is at the spa jail with Ryan. HE's still pretending to be non-mobile. She sends out the orderly. Ryan pops up HELLO! Daughter!! HE says no surprise communication: what is wrong? She says Spencer won't have ex with her, found the letters and pills. Ryan is mad. He realizes Cam must have been in on it all if he covered for Spencer.  She says he can't get mad or she'll out him. He says "You are just like your mother, I couldn't turn my back on her".. THEN he has a flashback to Felicia stabbing him. Is FELICIA HER MOTHER? I mean, it sure looked that way. The timing doesn't work but..whew!! Hmm I need to think about that. Ryan tells Esme she'd better sleep with Nikolas soon. She says she can't wait for Spencer to find them together. Then he says they'll take down their other enemies ONE by ONE. 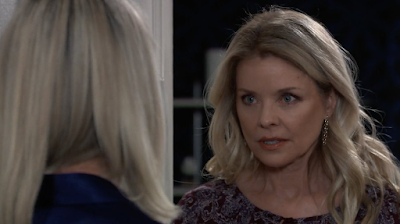 Felicia is at Maxie's...Nina is at the door. Fe says Maxie is at Deception, working late and she's with the kids. Invites her in for popcorn. Nina finds out Felicia knows about the story on her because Bobbie is one of Fe's BFFs. She's appalled, but how can you be nice to me? Felicia says that James makes her family.  She says she thinks Nina is a strong kick ass woman.

Carly and Drew get caught at Millo's house. They make up an excuse and Willow and Michael buy it. They say they were at the cemetery and saw Sonny and Nina. They talk about Nelle and Wiley and Drew points out that Wiley is half Nelle's so nuture/nature might not be the case. Anyway they leave. Willow gives Carly a key.

Carly now has Willow and Nina's DNA. She and Drew go to GH. She asks Britt about getting a test done.

By kdmask - May 12, 2022
Email ThisBlogThis!Share to TwitterShare to FacebookShare to Pinterest