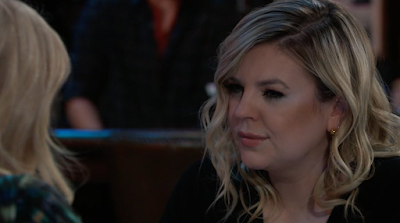 Felicia and Maxie at Charlie's talking about Luke, drinking whiskey. Say that Holly, Sean and Luke are gone and Robert must feel awful. Felicia still wants to talk about Louise. Maxie doesn't. Maxie tells Felicia that she wants Austin on her "phone chain".

Laura is mad Victor is in the house... Spencer and Ez are in the kitchen. Laura calls him Smarmy. LOL He says he's not leaving PC. He wants to atone for his family sins. Spencer and Esme made tea. Laura tells him to stay. Victor drops that Luke died.  They have tea. Spencer and Esme watch Laura and Vic go toe-to-toe on the banter LOL

Willow goes to see Nina. She apologizes to Nina for telling her secret. Weird scene. Willow says she'll be in trouble if Michael finds out she was there to see Nina. She wants Nina to give up her legal claim on Wiley and then she'll work on Michael to help her see him. Nina is like no way. Willow keeps arguing. Tries acting tough. Fails.

Carly gets home, Sonny's baking.. she looks all pissy. Sonny's made lasagna -- she tastes it. Needs more sugar. He got bread and wine. Sounds a bit manic to me. They eat..she picks her food. OH! He mentions LUKE!! WELP...she didn't know yet. She wants to go to Bobbie's but LUCAS told Sonny she went to bed early and he gave her something to help her. So.. don't go over. Carly is tired of pretending that everything is ok with she and Sonny. Sonny says "Nothing compares 2 U" like the Prince song LOL She's mad something almost happened in Nixon Falls. OMG HE HAD NO MEMORY!! Good LORD!! She tells him to go see Nina 'I know you want to". She's such a bitch.

Marshall and Curtis back in Marshall's hotel room. OF course Marshall starts to back out telling him. Good God, this is just so boring. He says he did something and before it became bad for the family, he left. It was criminal and he was under a bigger boss and was in trouble and left. I bet the boss was Cyrus. Marshall won't say more. Curtis says he knows Mob people...and he can help him.

Austin and Britt out at the Savoy. Trying to pick up people. Cute but obvious. Britt strikes out-- Austin doesn't even try. He tells her that he likes Maxie.

Carly says if Sonny isn't gone in the morning, she will be

Nina tells Willow to buzz off

By kdmask - January 11, 2022
Email ThisBlogThis!Share to TwitterShare to FacebookShare to Pinterest