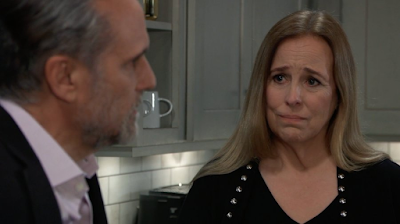 Laura tells Sonny about Luke. They hug. Laura says he was her partner long ago. She was a different person. She likes herself now. They talk about Cyrus...then Laura asks what is wrong with Sonny. He tells her about Nixon Falls and Mike and such. He tears up. Wonders if Carly will ever forgive him. VERY GOOD SCENES.

Carly charges into Nina's office to bitch at her. Nina spills that she and Sonny were 'together' on NYE. "something else he didn't tell you"..Carly yells...screeetches yada yada. Nina basically says Carly is an idiot for leaving Sonny because if it was her, she'd be there for him. She says that SHE stopped them sleeping together. Sonny would probably still come back to her and Carly slaps her.

Trina sees Curtis and her mother making out in the elevator. She's ok with Curtis being in Portia's life. Curtis leaves so Trina and Mom can have some alone time. They talk about Ava and Trina was upset with how she treated Spencer. They talk about the cabin trip.

Marshall goes to GH to see TJ. TJ says unless Curtis says it's ok, he's not going to have much to do with him. Marshall says he can't tell Curtis the whole truth. Curtis comes in. Asks if Marshall is a stalker. TJ is called away.

Esme has some drugs (I think for the cabin) and as Spencer comes in she asks him how the dinner with TRINA went. :eyeroll: Anyway, they end up making out. Victor comes in! He wants to have the Cassadines united. He tells Spencer that everyone in the fam tries to kill each other at one time or the other. Basically, get over it LOL.

Liz shows Finn her ring she found in her locker. He thinks one of the boys must have found it, put it in her pocket and it fell out. They try to figure out what happened. She has to go home and ask them about it...without Finn.

Marshall seems like he's going to tell Curtis the truth.

Victor is waiting for Laura

By kdmask - January 10, 2022
Email ThisBlogThis!Share to TwitterShare to FacebookShare to Pinterest