Michael and Sonny. Michael's mad. Sonny's mad. They are mad at each other. Michael thinks Sonny protected Nina... Sonny says he didn't. Michael yells. Sonny yells. Dante comes in and tells them to calm down. 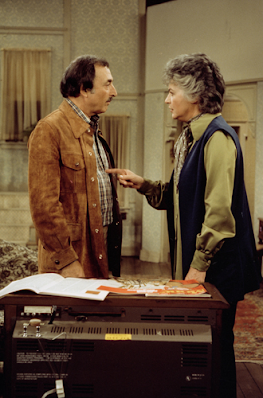 When you see Laura... you'll get this reference. It's horrible !!! Wardrobe stop.

Laura and Kevin call a family meeting. Spencer and Nikolas are there. Spencer says he misses Nikolas and Nik misses Spencer. Esme comes in to put a monkey wrench and things.
Kevin takes her out for coffee. Laura says Spencer needs to forgive his father. He says "you sound just like Victor".

Kevin asks her how often she sees Ryan. They talk about his family and his books. When she goes to the ladies' room he calls Pentonville to restrict her from seeing Ryan.

Brad tells Britt he didn't know the poison was in the food he gave Peter. But you know his Aunt did it LOL . Dante stops in to talk about transferring Peter to Pentonville. He also asks Brad why he'd be in with Wu Crime Family. Brad's like SHE'S MY AUNT. Dante makes Brad nervous. Dante Leaves. Britt tells Brad to grow a pair and stop acting so twitchy. He's scared of his Aunt.

Carly and Drew talk about whatever she is going through. She wants to hear about Scout to cheer her up. They talk about Scout. Then Carly talks about leaving Sonny. He has beer. She has wine. They eat peanuts.

Drew and Carly are glad to be friends

Sonny yells, Dante is worried about him.

Ava says to not ask for visitation with Wiley because Sonny will be happy if she doesn't.

I HAVE NO IDEA WHY THIS WAS A FRIDAY SHOW. none!! BORING

By kdmask - January 14, 2022
Email ThisBlogThis!Share to TwitterShare to FacebookShare to Pinterest