Sunday Surgery: Q and A


HAPPY SUNDAY! It's that time again and I'm ready to go. Dave had a GREAT idea to 'interview' me this week. I had a good watch with the show so hopefully my answers will provide you with some insight.

We will have Tim Hortons in honor of Niagara Falls.

It's Daylight Savings Time--- you up??
I HATE DST. I really wish we'd just leave it standard time. 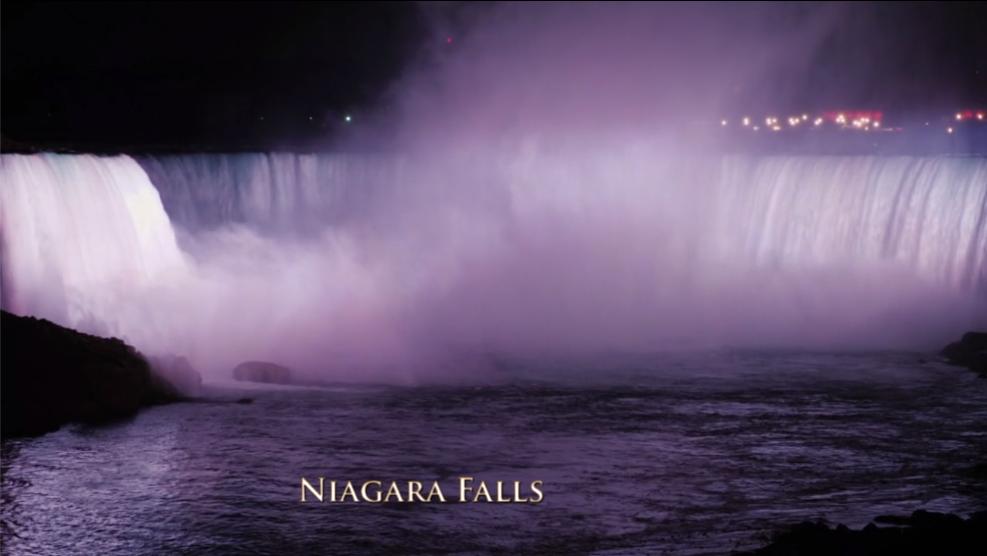 This was a big week for you. At least 4 out of 5 of your blogs were actually positive and upbeat. Now, that doesn’t happen every day. (or week… or month…) So I decided to find out what exactly made this week memorable for you and interivew you for this week's sunday Surgery.

Here's some questions for you this week:

Oh! I'm excited!! Maybe it will spark more of my memories this way! 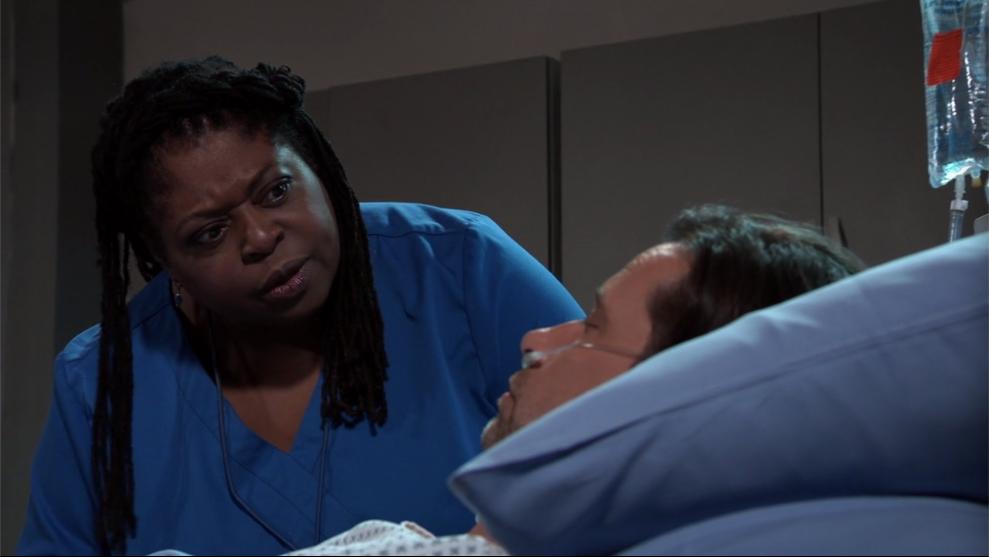 Well to be fair, Lulu was traumatized and she just blanked it out. Franco's memory loss only lasted 1/4 of the show so...he recovered faster.

Mac and Felicia were on for about 3 minutes. (out of the 25 minutes they are allocated to appear throughout the year) this doesn't count their obligatory appearance at the nurses ball. What gives?

Oh, now, see I was thrilled to just see them at all! LOL... coupled with Lucy I couldn't even get mad they haven't been on in ages. I loved the Felicia-Flashback that used Ryan's own dialog to have her remember!! Lucy and Mac's talk was really nice as well.  I was a bit more angry on Friday when the show wasn't all about everyone's reaction to Ryan being alive. 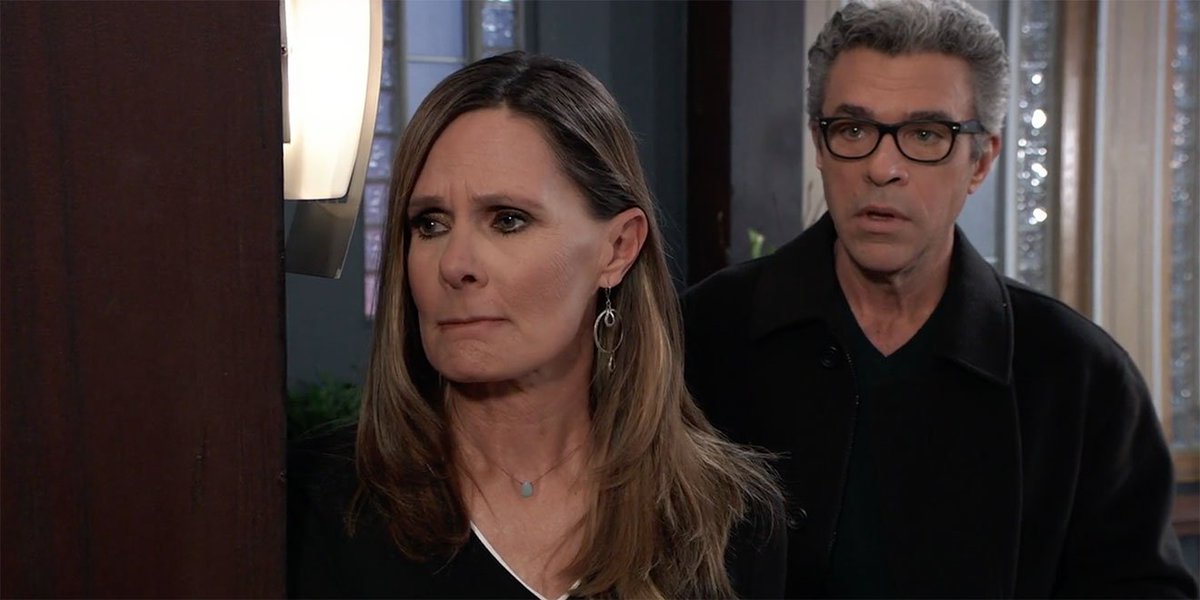 Speaking of the Nurses Ball, Lucy appeared (nearing her 25 minute quota for the year as well) to shamelessly plug the 25th anniversary of the Nurses Ball. What special things do you think they have planned this year to celebrate?'

Twenty-Five of the best past-year characters of #GH coming on and participating?!! hmm, that's a wish! Maybe flashbacks?? 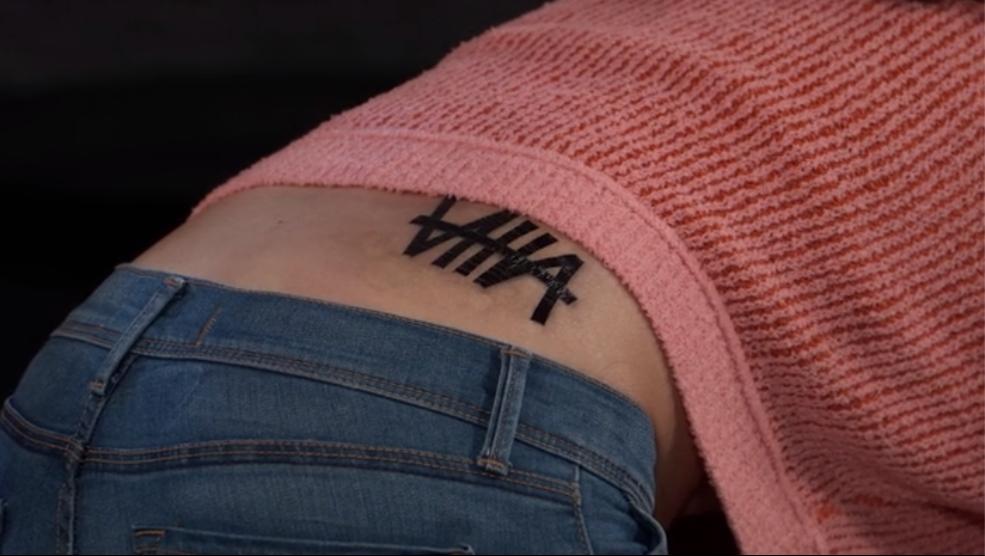 Are you going to get a tramp stamp on your lower back too? Any inspiration? Speaking of which, the tattoo looked like the Nine in Nails logo, only squished. Or the roman numeral 8A. (Doesnt sound very trampy to me.) 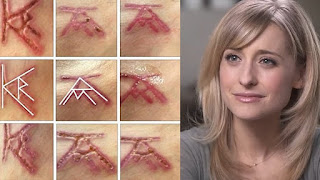 That's actually fashioned after the real-life sex-traffic case that hit the newstands.  The actress from Smallville was one of the leaders of it. They got branded in the same spot. I guess 'branding' was too much for ABC. See above pic tho--kind the same?! 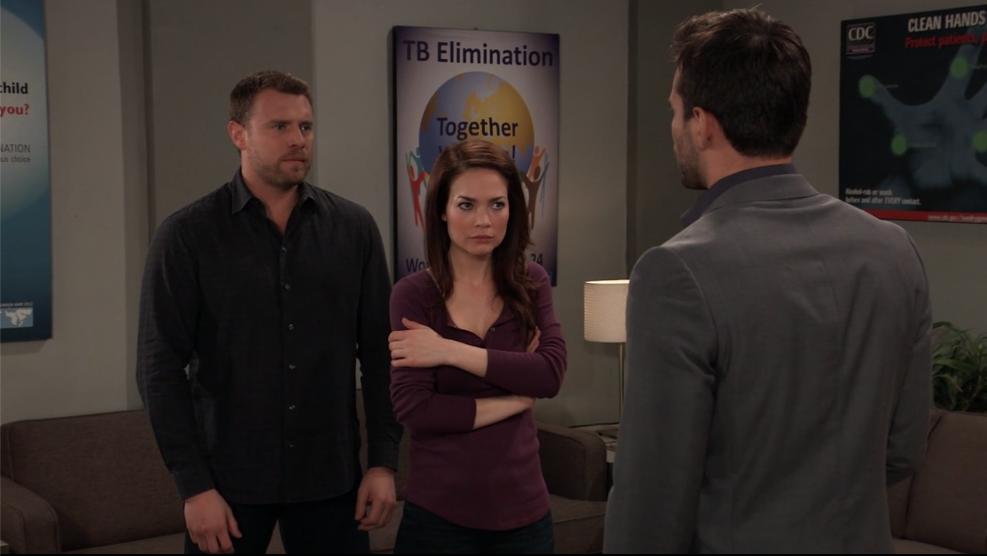 Chase was spilling all the confidential police secrets to Liz and Drew. Is this the PCPD ineptitude at it again? Where you yelling at the screen "a real cop wouldn't do this"?

I was actually thinking more along the lines of the "non-urgency" it was given. Seems like we should have saw full on PCPD on alert. Media blitz.. but nope. 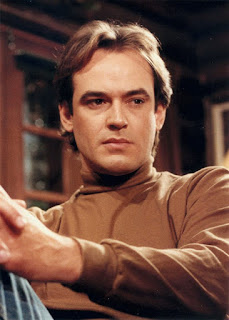 Were you blown away by the special effects this week? The way they de-aged Ryan and Felicia put the big studios to shame. X-men and Star Wars dont hold a candle to GH techs! They should give out Daytime Emmys for best special effects?

Oh, ha ha.. I did love the flashbacks and Kristina Wagner hasn't aged at all. She even looks better now!

Anna/Alex. Alex/Anna. Months ago, Anna revealed that she gave birth to Peter. Now it is speculated that it is all a memory and that Alex is Peter’s mom. This would keep Anna's history somewhat intact. Is this storytelling, and the way it might play out, a stroke of luck or a stroke of genius on the writers part?

Genius. I really think that this was planned from awhile ago. I'll have to try to find out for sure but it really goes with the whole Twin Story. Remember that they've always said there's more subjects. Plus, Anna doing what she did to Faison was always sketchy (drunk unprotected sex).

It looks like Ryan and Ava did the nasty off camera. (Thank you Soap Gods for keeping this off camera) And Carly is pregnant. Do you think in 8 months we might see Ava and Carly in neighboring beds in the maternity ward? You know, this show can really use a good baby switching storyline!

NOPE NOPE NOPE. I can't see Ava being pregnant after this. She already has Avery. I also wonder if she'll be on vacation a bit after going over the railing? The Niagara Rivers is fierce!! Do we all think that Carly will lose the baby? Hmmm..
OH AND PS-- you don't think JL and MW have chem? I wouldn't have minded seeing more from them!! 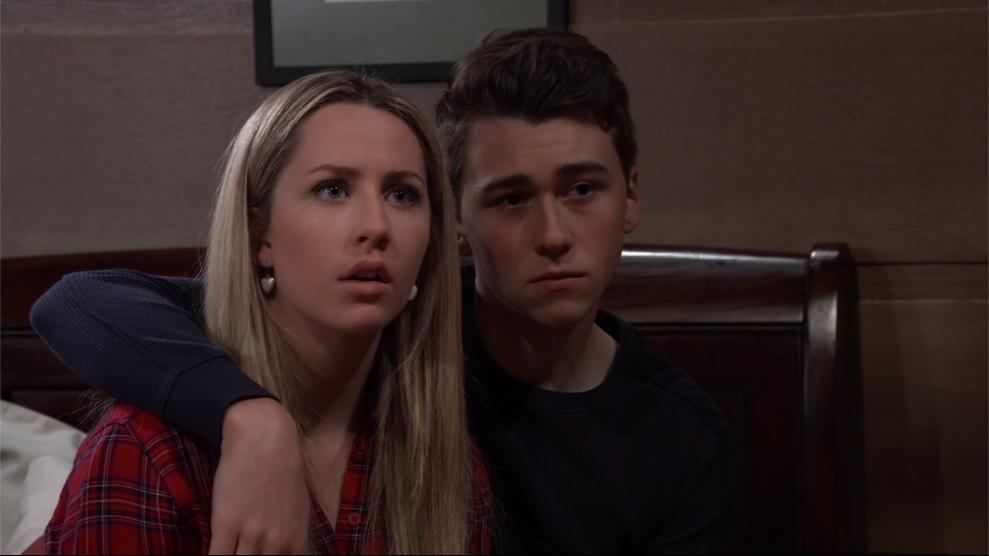 Based on the past few weeks, do you think Oscar is still short term or did he get a reprieve from TPTB?

I think he's a gonner. I'm hoping for BIG DRAMA with that death too. 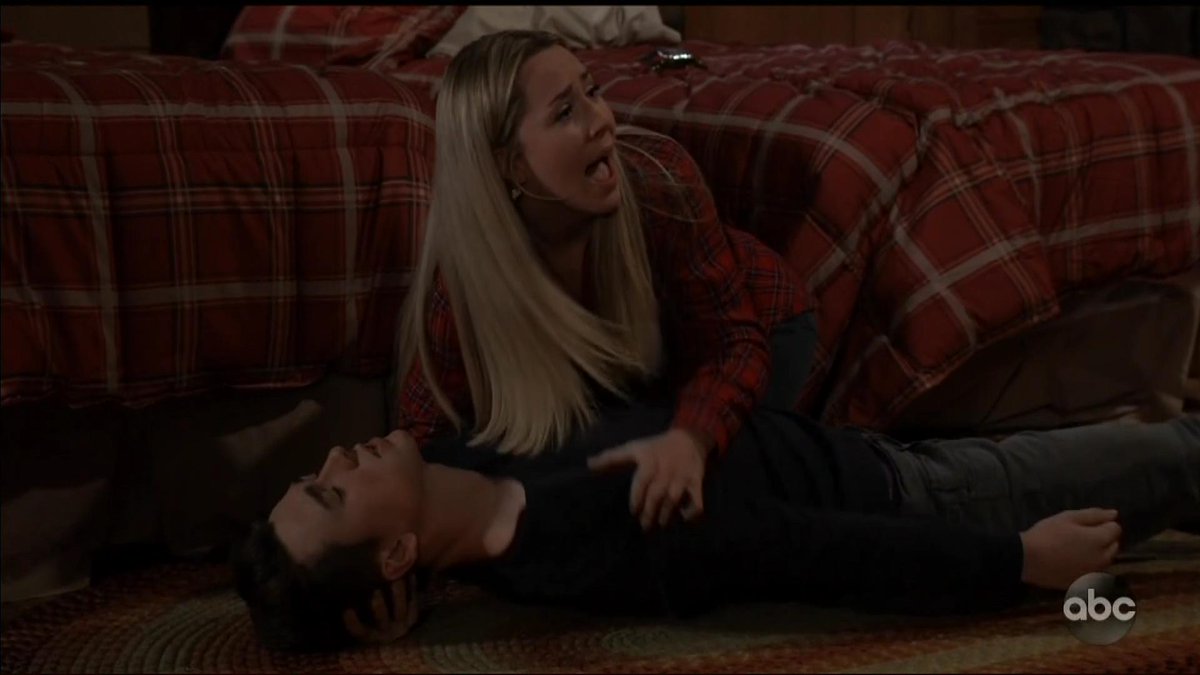 What surprised you the most this week? Is there anything you really just did not see coming?

Oscar's seizure, Cam running into Ryan.  I'd seen the promos that Ava found Carly in the trunk--so I was spoiled for that.  Another "Surprise"?? Drew still owning Aurora and taking the company chopper to the Falls!! 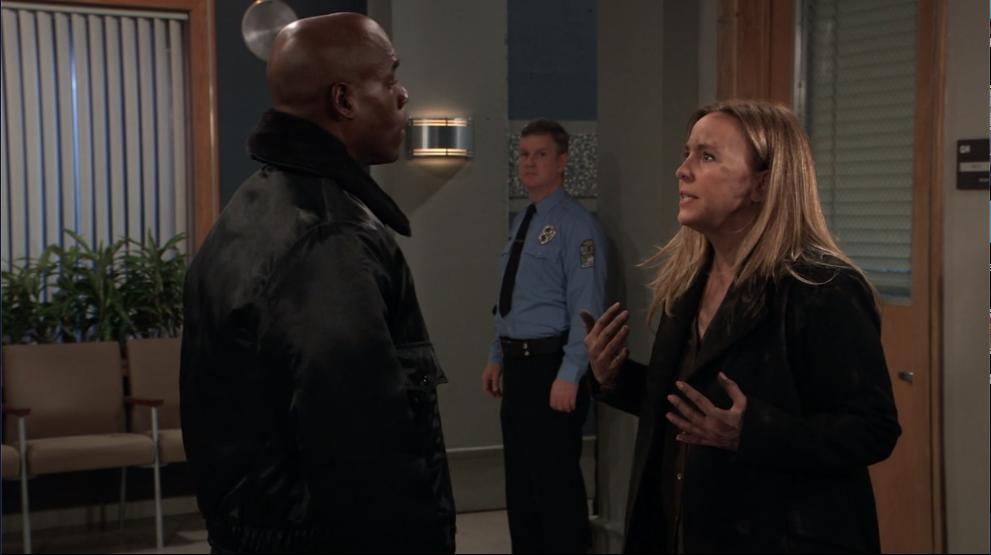 What actors/actresses stood out for you this week? (how about besides the obvious ones?)

Genie because of how powerful Laura was written. The kids did a good job too. The girl that plays Trina is a natural. 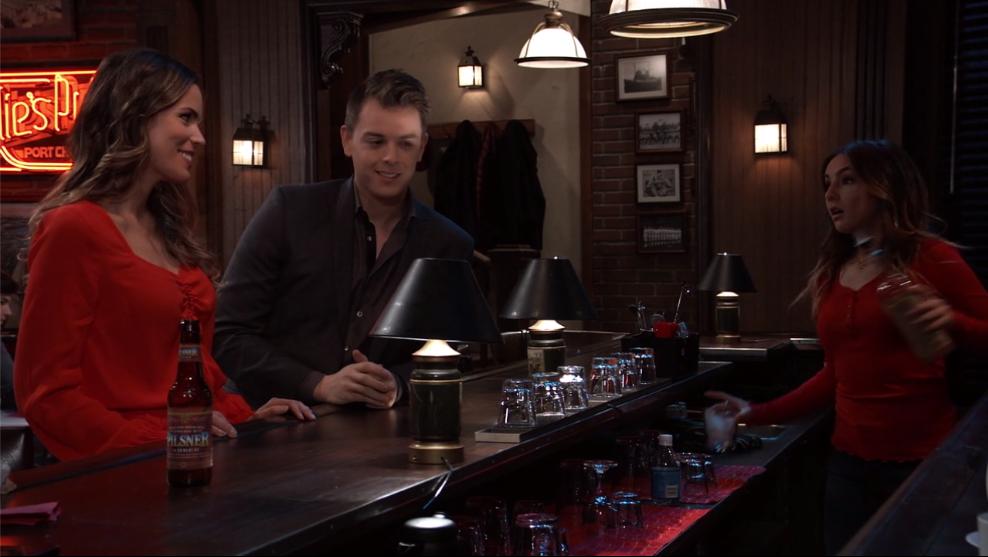 Ok, Dave.. thank you for the questions but move over, I have a few bones to pick with everything:
1. Michael meeting Sasha on Friday--um, no one called him when Carly was missing and asked if he had seen her?! He had no idea she was gone? Lulu didn't run to Maxie to tell her that Ryan was alive?? Huh?? Where were Felicia, Mac and Lucy?  They should have been on FRIDAY and skip the other stuff--they could have had the kids on/Oscar because they were tied in..but anything else? NOPE.

2. Did Jason really have to shoot Ryan? Doesn't St. Jaysus do enough? You know Laura has a handgun permit. Hell, she's shot enough in her lifetime (and a machine gun too).

3. Turkey. At first I was glad Robert and Sonny were doing some WSB thing together. Now it's another cliche "soapy" "adventure". *sigh* Reminded me of the Tracey Q painting caper. The sets, the extras, everything. 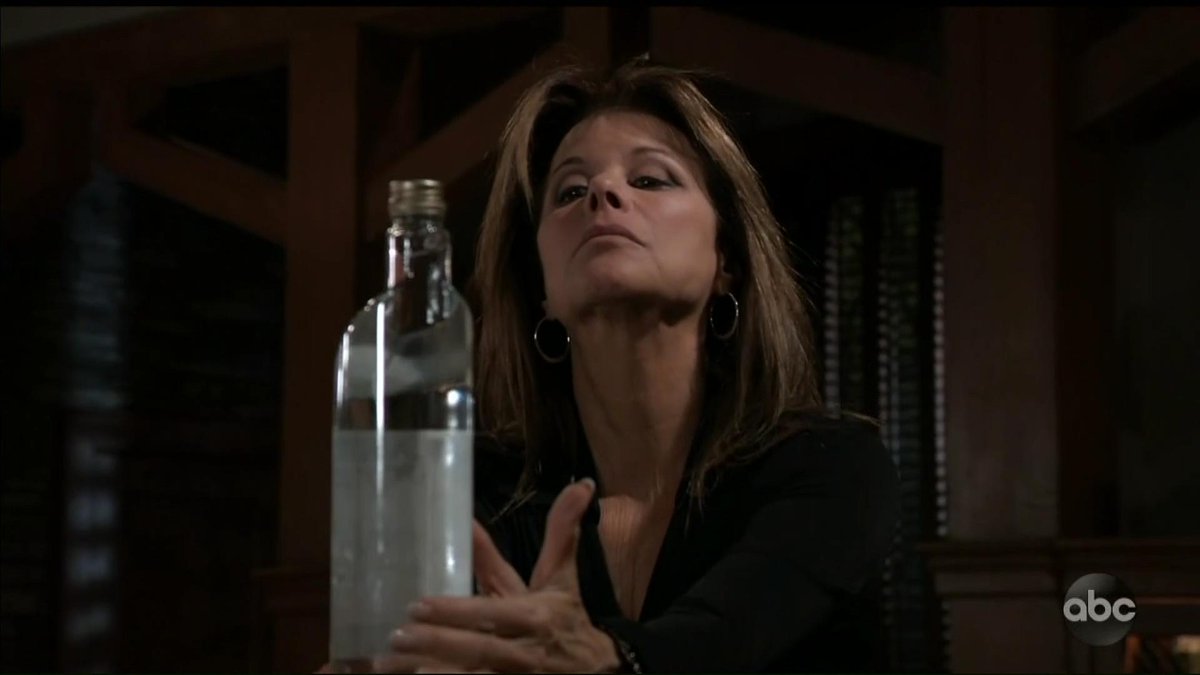 WUBSHELL WEEK:
``Oscar had a seizure in the hotel room, Rushed to the hospital. Kim and Drew come by chopper and it looks like he may be starting to go downhill.
~~Ava and Ryan make the love, then she sees Carly in the trunk but doesn't know how to react. Ryan tells her it's a wedding present. Ava thinks he's having another break down.  Ryan dumps Carly down a ravine. Carly starts climbing to safety.
~~ Jason and Laura make it to the Falls and catch up to RyVa on the footbridge. Jason shoots Ryan in the arm... Ryan grabs Ava and jumps off the bridge.
~~Jordan needs a kidney --
~~Franco is going to be ok--
~~Maxie grabs a hair from Sasha saying she was 'getting a gray one out"
~~Daisy is upset that Krissy is taking her place on the top of the SHank totem-pole. She goes to Sam to atone and apologize. She has a giant tatt  on her back hip
~~Alexis has a huge daydream about Jules...they have hot sex and she's upset with herself and gets a bottle of vodka. So far, she's just looking at it. 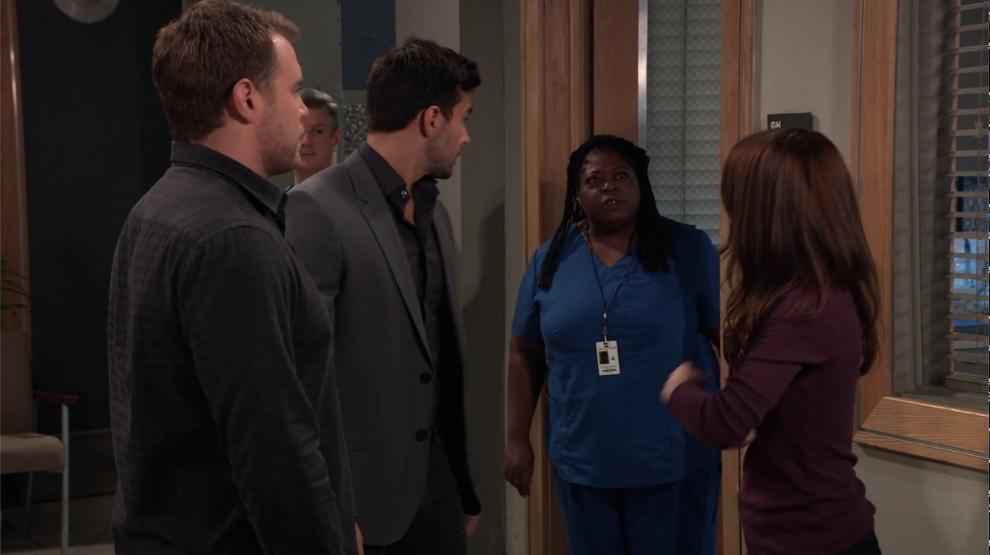 FUN OF THE WEEK:  Epiphany finding out Liz and Franco were married!! "Your HUS-BAND"?? 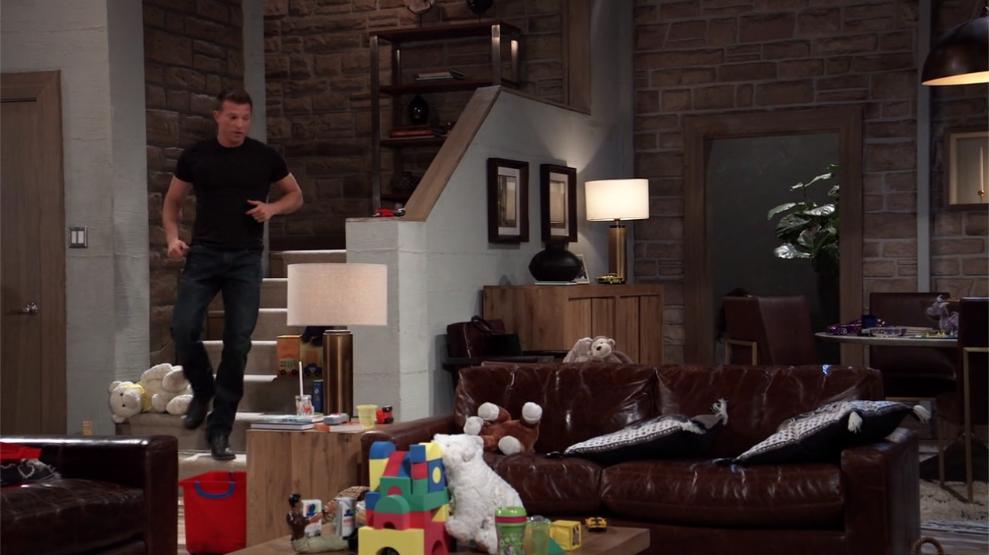 PROPS OF THE WEEK:  TOYS!? In Sam's house?? Well what the what. Although how old is Danny? I have no clue anymore -- Jason helping to pick them up gave me boring chills tho. 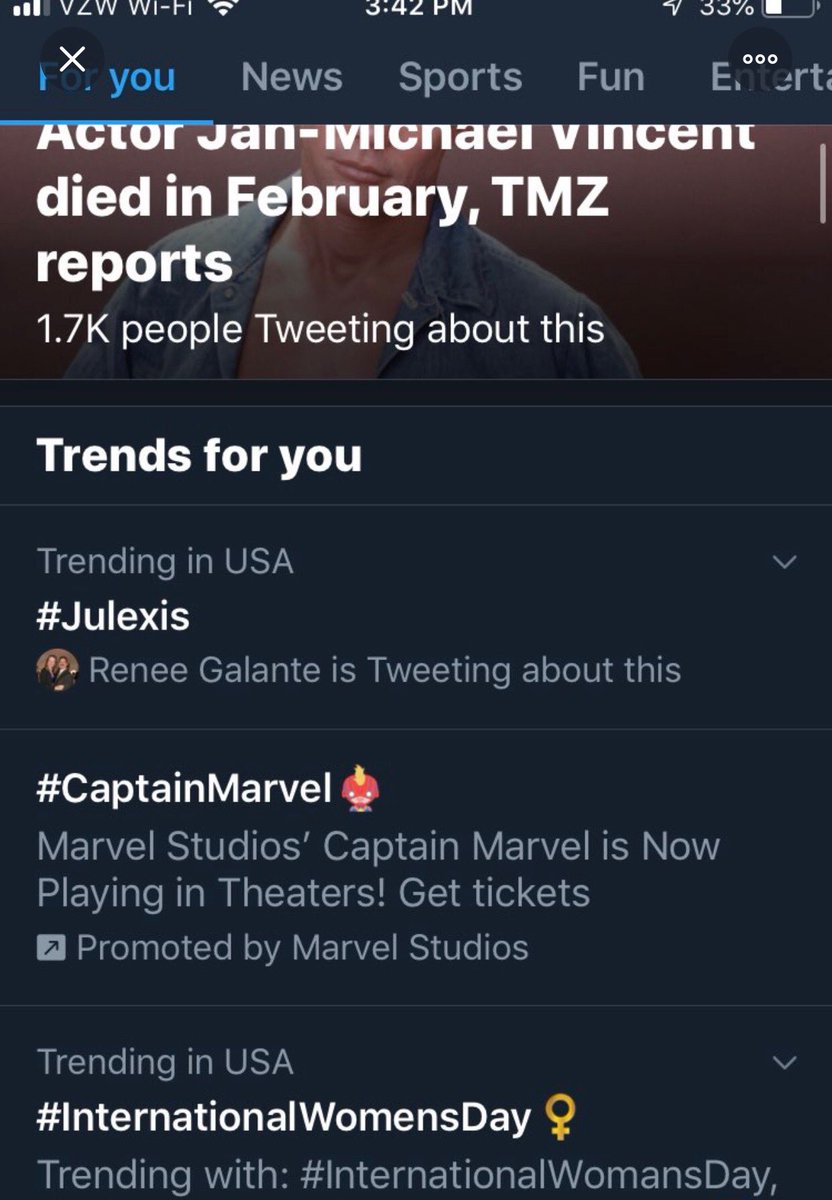 TRENDING ON TWITTER:  That's right--Julexis was trending!! I think the scene was hot and appeased Julexis fans but kept the show out of hot water with the whole "getting them back together again" thing.


That's a wrap folks! Let us know how you liked the change this week! March is going to be a month of on and off for me-- many meetings (I have one Monday) and I'm going to Buffalo to my brother's for 4 days toward the end. I think I might be able to watch GH a bit. Amazon Prime added a lot of "new" movies--mostly older movies. "A Home of Our Own" with Kathy Bates from 1993 is a gentle good one. You can tell she's just starting to act. OH! And did I tell you?? ALL The Little House on the Prairies are on there free now too. All new digitzed!

Hope you enjoyed GH as much as I did this week! I don't know what's going to happen after this Ryan stuff is wrapped. I'm hoping the SHank thing is getting better. I liked Daisy getting put out by Kristina. The baby swapping thing also has to crank up.
By delcodave - March 10, 2019
Email ThisBlogThis!Share to TwitterShare to FacebookShare to Pinterest

I RAN HOME!!  Savoy: TAGGERT is back!! Jordan is looking gorge. She and Portia have drinks.  Marshall is hurt...taking him to the hospital.... 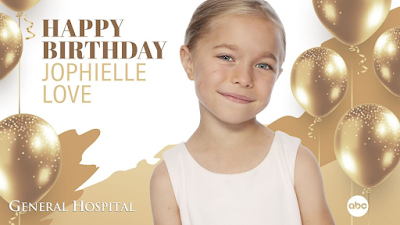