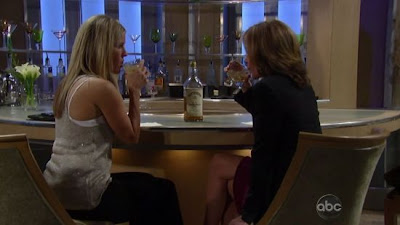 HE SHOT his gun baby!!


It looked like he shot in the hall. Hope people weren't waiting for traffic court and got a bullet! LOL It took the PCPD 11 minutes to get there after the shot went off!! ahahahaa. So much for safety.

WOW, Starr's bitch face to SONNY WAS AMAZING!! You go little girl. Even though she's wrong I loved that scene!
The fact that Sonny and McBain have a back story?? Nice touch.


"His remarkably attractive hair" says Todd about McBain to Carly when she asks his story lol.
Maxie and Ewan. I like Maxie and Ewan is giving me a headache. I'm trying to like him and we do need a psychologist. Get him a damn office.

WOW, that Connie/Kate scene was one of the worst I've seen in a long time. What horrible acting. I'm sorry but I'm not going to lie. Her "turning" was just painfully bad. eeshhhhhhh. What a waste of a storyline.

Olivia was listening to Tracy/AZ!! Interesting!!

John McBain is trending on twitter. Yesterday we did Sonny and Todd Manning! I wish it counted towards ratings!!
By kdmask - March 13, 2012
Email ThisBlogThis!Share to TwitterShare to FacebookShare to Pinterest