Ah, Thursday..I can only hope today's show is as good as yesterday's!! See, we need NO CGI or that stuff. Having everyone at the hospital was awesome. Of course, I missed Bobbie but hell-- it was just a great change from all the Balkan crap. I so wish the entire show would revolve around the hospital again. I didn't ask--what did you think of the new doctor? He didn't make me gag on his acting  (usually I can tell if I like/hate someone in about 5 lines). I'm just stumped as  to why they are bringing in another newbie. If say, Matt would have died in the crash--maybe. I think Jason Cook has gotten the shaft so badly on GH, he needs to go somewhere else.

NEW SCOOPS ARE UP!! 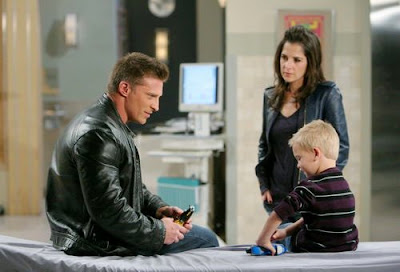 Jason and Jake--'member them??
I do get the thing about Jason/Jake--- while I was praising yesterday's scenes I am also well aware of the missed opportunities and dropped stories that have happened in this tale. I do think they are showing this now because Sam will be able to maybe have kids. The same exact thing is happening with Nikolas/Aiden/Lucky. If they never show the kid with either guy, how is the baby reveal going to mean anything? That's GH's M.O. though, families and history ties are so seldom used, they really aren't part of the canvas. Newbies might never even know Jason HAS a son. Or that Molly is actually Ric's kid, not Sonny's! LOL We sure wouldn't know Carly has a Mom in town. She can't even mention Bobbie when they are in the damn hospital! It wouldn't have killed the writers to have had her say "I'll have Gram check on her later"...
TODAY'S SHOW: More Krissy/Sonny scenes...awwwww. He tells her about Stone. One of writer Karen Harris' shows. Her shows will end next month I think.

Lisa is having Terrell mess with Robin to get her away from Patrick!! Did you see the looks Lisa and Robin gave each other?!
Mayan and Edward... I would care more if they were on more. Once and again isn't enough. Tracy was back without Luke..damn it. BOO.
LOVED Theo's talk with MORGAN!! LOVED him with Dante...it's good we know who he is and can catch all this double-speak. I am liking it right now.  (I know, shut up! LOL) Maybe he's seeing Helena on the side!! Heh. Nikolas did say Helena knew "The Balkan"!!
Robin said she was "Born and Raised" in Port Charles-- which we all know isn't true. She wasn't born there.
I still think Abby is going to be a man..really messing Michael up. He's going thru "transgender" THINK OF THE POSSIBILITIES!! :twirling:
Yes for the Jolivia mention, too bad Johnny didn't actually GO IN THERE. ;/ boo.
OLTL Today: OMG, Natalie swinging that gun around...with her fugly outfit, threatening Marty was just hysterical!! She was SO ASA!! I was wishing she would go find Inez for target practice. LOVED when she went into labor...it's PERFECT. Soapy and used a million times but I love it.heh
"I'll do better than an autographed photo for your wife..I'll sleep with her"!! Says David. Remember TED KING  is coming to OLTL soon! woot!! Maybe he's the  artist that did that pic of Blair in the box!!
HEY! LOOK, let's hope they find a home on some TV channel so we can watch!
8th Annual Daytime Emmys Are On — And Will Include Web Series Awards Digest has learned that the Daytime Emmys ceremony will indeed take place on June 19th this year, however, details surrounding the broadcast remain up in the air. Awards Director Brent Stanton tells Digest that the awards will also include a new category to accommodate Web series called Special Class Short Format program. "This year it will encompass all daytime genres, including Daytime Talk, Children's, How-to etc," says Stanton. "After we see what dominates in this category this year, we are looking to separate out to a more defined category." Stanton hopes the drama Web series will dominate the new category, which means fan faves including EMPIRE, VENICE and GOTHAM could be considered.

Twitter @wubsnet hit 7500 followers!! woot! Thank You to all that follow me and my live Soapy Tweets! I love doing it. If I go back to work full time, ok WHEN I go back to work  I will miss you all so much!! That's not coming for a bit though.
By kdmask - January 06, 2011
Email ThisBlogThis!Share to TwitterShare to FacebookShare to Pinterest