A Quacking Success!!! Thanks to GH Fans!! 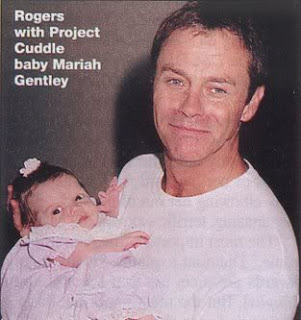 This past Saturday, while the GH rubberduckies finished packing for their new homes, a newborn girl was found abandoned in the trash in an alley in California's San Bernardino County, with her umbilical cord still attached.
Over the last 14 years, Project Cuddle has saved over 675 newborns from abandonment ... that's almost 50 babies per year.  John Stamos (previously Blackie Parrish on GH), is the National Spokesperson for Project Cuddle and Advisory Board Chairman.  Michelle Stafford (Phyllis Newman on Y&R) is a member of Project Cuddle's Advisory Board.
Tristan Rogers (previously Robert Scorpio on GH & currently Colin Ashby on Y&R) is a longtime supporter; in his words, Project Cuddle "is really something that tugs at the heartstrings, and I can't think of a nobler thing to be involved in."
The rubberducky auction was part of a larger fundraiser to benefit Project Cuddle in honor of the GHers who became parents in 2010:  Rebecca Herbst, Dominic Zamprogna, Jonathan Jackson & Derk Cheetwood.  Over $5,000 has been raised so far thanks to the generosity of GH fans!!  Since every single dollar counts, please head over to the Port Charles Wishing Well site by January 31 and make a PayPal donation if you have not already contributed -- no amount is too small.  http://tinyurl.com/2b76rcq
ALL WUBBERS SHOULD LEAVE MESSAGES IN PCWW'S ONLINE FAN GUESTBOOKS BECAUSE HARD COPIES WILL BE SENT TO THE NEW PARENTS!  http://tinyurl.com/2c6327r
Thank you !!
By kdmask - January 24, 2011
Email ThisBlogThis!Share to TwitterShare to FacebookShare to Pinterest