Liz Webber: Why She Matters 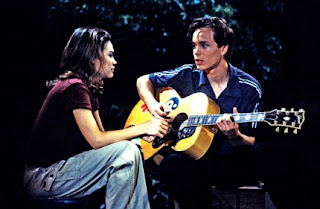 On this day of yet another GH repeat, I thought I'd take the time to write about the news of "Liz Webber" leaving the show. ABC actually said "Storyline dictates that Liz Webber leave the show in the spring"... Whatever idiot wrote that or decided it was a good idea to put out there needs to go in my mind. Uh,  last I looked, the WRITERS dictated the storyline. Who's fault is it if they can't write for someone that's been on the show since they were a teen? A character rich in history, who's brother just got back on canvas. Someone that's been half of two hugely popular couples? A single mom with three kids that is a nurse in the actual HOSPITAL.

Whether or not you "like" the character of Liz... it really doesn't matter. By firing  Becky Herbst, GH is losing one of it's pivotal players and and part of the legacy of GH.  We've already lost almost  all the Quartermaines.  There are two Webbers left.  Who's Dr. Steve without Liz? Some dude who just showed up on canvas, that's who.  There are no Hardy's. The Scorpios are about done--Maxie,  Robin and the seldom used Mac are it.  They killed off Georgie. They may as well have killed off  Felicia. We know they do f'all with Robert and Anna.  The Cassadines? Stefan, Stavros gone. Helena? Brought out when they need a baddie to shake a stick.  I bet Tyler Christopher is eyeballing that door right about now.
The Falconeris could have been a great family to weave into the Corinthos.  They take Kate out of the equation and shove Olivia to the background.  Dante's on every dang second. No balance. 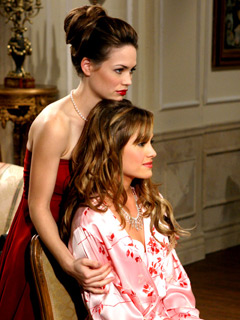 We have a bunch of newbies floating around...struggling to find a story.  No one related to anyone else.: Claudia..Abby...Terrell...Siobhan...Lisa and there's a casting call out for some 35 year old "Grace".  Whatever. I don't care about these people!! Even people like Diane and Spinelli don't have anyone else in town related to them.

Finally, Jonathan Jackson is back-- and now Rebecca is leaving. L&L2 for me, was the next generation. I know it also tears Liason fans apart.  Well, EVERY fanbase needs to be pissed off. If she can go, anyone can go. I remember when they killed off Alan..Emily..Georgie... let Dillon go...killed off Alkazar, brought Skye back for NOTHING. Genie Francis basically begged to come back only to be told there was no story for Laura!! WTF!!
I love Tony Geary but between he and Ingo's vacations, I'm tired of all their be-boppin' airtime. On then off...off then on.  "Luke's" airtime cuts  into Tracy's...Ethan is sputtering around almost getting a story going then languishing in the background. This Mayan thing? Talk about lost momentum.

Why oh WHY can't GH use it's vets like other ABC soaps do?  Why do we have to watch our history evaporate?  Stories that don't weave together...stunt after stunt with no meaning. 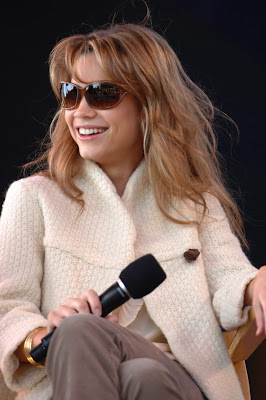 And not for nothing, but Becky herself has a huge fanbase. Who remembers "The Pearls"?? They've been around since the late 90's and used to post all the time on the AOL Message Boards. Liz Fans First!! They didn't care who she was with. I so hope another soap grabs her up quick. Hell, almost all of GH has moved to another soap!!
I don't even know what to say other than it's another blow for our once beloved show. We can turn our sets off but ratings are so low now, I don't even know if that will matter. Unless there are RH fans out there with Nielson boxes, it probably wouldn't make a dent. Calling the hotline? You can try it, but we know how Guza loves even negative attention. I for one am going to send Rebecca a nice handwritten thank you snail mail and let her know I appreciated all the years she gave to us on our screens. Wish I could send a big ol pile of something else to TIIC but that would be beneath me.
Wouldn't it?

By kdmask - January 19, 2011
Email ThisBlogThis!Share to TwitterShare to FacebookShare to Pinterest
Labels: rebeccaherbst