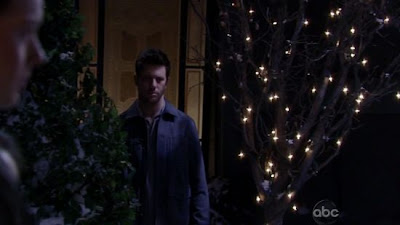 The opening was harsh...Abby about to be raped, Michael's flashback to Carter. Then Michael beats the hey out of Brandon thinking it's really Carter. Jason saves the day in the end...grabbing Michael away. Poor guy that plays Brandon.  LOL. "hey mom, I'm on GH,  I get to pretend to rape a girl, then get beat up!!"
I have to say I thought the prison flashbacks themselves were done well, with the right amount of violence and yet not too over the top.  I know some people on twitter didn't agree, but I think they did a decent job. They didn't skirt the issue, but they didn't get all graphic, imo. The reveal (words) was riveting. For me, it could have been much sooner  but they did it well. Kudos.
The bruise make-up people have to be going nuts with all the beatings and bus accident.  LOL


Shawn is just one fine specimen of a MAN!! wooooo hooo!! I so hope he's a real good-guy. Why wouldn't Theo/Balkan talk to Shawn in his REAL accent?? I don't get it!!

Siobhan gets popped by Lucky. Thank god for closed captioning.  I did get the  "Shaging" part.  Lucky got all crazy-eyed there for a minute!! And OMG, but that statue was a greek goddess in the background, not a Catholic one!! hahaha

Robin and Brenda and Carly: I only wish the scene was longer.


Hate that Alexis and Jax HAVE TO TALK ABOUT THE FACE. Ugh..please.


Ok..here's the question I asked on Twitter.   What is Brenda going to tell Dante about the Baby?
A) It didn't make it
B) It's with her sister
C) It's adopted  out to Brangela
D) It's in a tree
E) The dingo took it.


RATINGS!! finally they are out!