Laura and Martin in a safe house playing video games!! They talk about Cyrus. The guard guy comes in and tells Laura Victor Cassadine is alive and in PC. Laura tells Martin that Vic makes Cyrus look tame. Some new cleaner lady came..the guard has to call the service to see if she's legit. 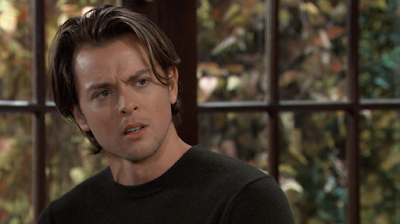 Drew says hello to Willow and Michael. He tells Michael Jason is dead. Michael's upset. He thinks that No body so there's a chance. Michael also wonders what life will be like without Jason. Like he hasn't died before??

Brook and Chase tell Willow he's Bailey's "Daddy"...WHY would WILLOW Care? But she does. LORD why. Michael and Willow find out about Brasha baby and go to GH .

Victor comes to Wyndemere wants to talk to Nikolas about business. Victor tells Nikolas it was Ava that sent Scotty to him to set him free. Victor has news about Hayden. HE said he 'took are of her' for Nikolas because she was going to expose him ?? I don't even know. Anyway, he won't tell Nikolas WHAT he did with her but..? They also ask Victor why he worked with Peter. Victor won't tell but says the family is in danger. He leaves. Nikolas tells Ava he wants to send Victor packing.

Sonny asks Britt how the baby is. She says good. He says she seems way less bitchy now. He sees why Jason cared about her. She says "yeah so much so he chose another woman".  Sonny says he was protecting the family by marrying Carly.

Peter threatens to tell Carly about Nina and Carly. Of course he doesn't. He mentions Jason. Carly smacks him.  He taunts Nina with "What happens in Nixon Falls stays in Nixon Falls". He leaves. Carly screams at Nina about 'WHAT DID YOU DO IN NIXXXXXXXXXON FAAAAAAALS"  Nina tries to convince her Peter's making stuff up but Carly doesn't buy it. Then Sonny walks out.  Carly goes OFF. Nina leaves. Carly just loses it. Sonny tells her she's too much and to calm down. She says she's as upset about Jason's death like she was with his. He's like I'M YOUR HUSBAND! ahahaha She storms off. Nina texts Sonny and tells him to meet in the chapel. They meet and talk about Peter's threats. Sonny says "This is terrible timing... no one can know" and WILLOW is standing there.

Britt tries to talk to Carly. She calms her down.

The fake cleaning lady gets instructions from Cyrus.

By kdmask - December 06, 2021
Email ThisBlogThis!Share to TwitterShare to FacebookShare to Pinterest