I hope you've see the 2021 Wub Awards below!! They are always interesting to do because I forget so much along the way. General Hospital has a giant cast and a huge amount happening so it's a double challenge.

Brook dreams about a hot, oiled up Chase. Oh we see her cool bedroom!

HOT YOGA CLASS!! So the men are first. Shirtless Chase and Drew. Curtis didn't lose the shirt damn it! Then Maxie and Lucy come in when class changes. Maxie checks out Curtis' butt LOL. Lucy's all dreamy in love. She even has little O noises when she's meditating because she's thinking of him. Maxie and Lucy end up running out to go get coffee so they can talk.

Laura sees Martin eating breakfast alone. He says Lucy is exercising....He wonders if she has advice about Lucy. She says NOPE! and leaves. Valentin comes in, sits. They banter and joke about Marty being Santa. Talk about Brook Lynn and revenge. They also talk about looking at Mekko's will because Val is Vic's son. Martin tells Valentin about Lucy. Valentin is like you can represent Deception if you're sleeping with her! It's me or HER~~!!

Victor comes in the restaurant. Anna stops him "that's far enough"! She tells him she's trailed him all morning and will continue to do so. He said she's failed numerous times NOT killing Peter. (he's not wrong!!)

Esme is excited about Sonny's cabin. Asks Spencer if it has a hot tub. He has no idea. Laura comes in to talk to Spencer. ESME CALLS HER GRAMOTHER! OMG! Laura is like 'IT'S LAURA"! ahahaha

Curtis and Drew go to the Coffee Corner to talk about the "Marshall Project". They figure out they have to look for "Who Marshall was" during the years he was gone. Drew is going to offer him a job in the music part of the company so he has to put down a SS number.

Marshall and Epiphany. He brings her flowers. He had a great time when she sang. She thinks he's going to ask her out and he asks her to JOIN HIS BAND!! AHAHAHAHA Her face. WHOOPS. They talk and she says she'll consider doing it.

Brook Lynn and Ned talk in the Q Kitchen nook. About Olivia... Leo... relationships etc. Ned has been thinking about Bailey and thinking Brook has to be ahead of Chase so he doesn't hold her over her head like Valentin did. AND Chase is standing there LOL. Ned tells them to get a lawyer to iron out things about Bailey. 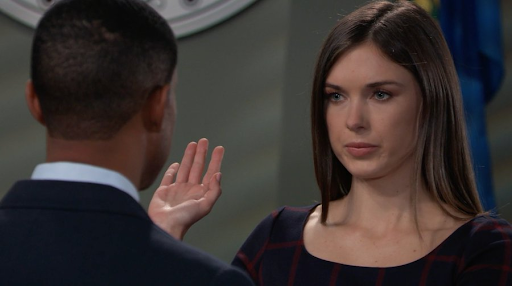 TRIAL WITH WILLOW STARTING! EEEKK! Scotty got the DA to get Willow to testify about the donations that Michael made but it was REALLY to get her up there to talk about the affair. First he gets her to talk about the DA and a contribution. She HAS to tell the truth because she and Michael aren't married!! OOOOOOOOOOOOOO!! He keeps asking. Then he says "shouldn't the charges be dropped like by an act of heroism"??? Was Sonny even a VICTIM? squee!! He asks if there was any reason Sonny didn't go after Nina himself. Oh he's going to get her to spill!! Nina tells Scotty to stop..he says "QUIET"!! Sonny grabs Carly to LEAVE! Carly won't go! ahahaha OMG Willow says yes she knows why Sonny wouldn't press charges. Sonny's FACE falls!! ahahahaha. SO GOOD!!! SO anyway, Scotty gets Willow to admit she heard Sonny and Nina in the chapel at GH and there was "LOVE" between them!
SONNY's FACE!

CARLY'S FACE!! AHAHHA OMG tomorrow is going to be awesome.

By kdmask - December 27, 2021
Email ThisBlogThis!Share to TwitterShare to FacebookShare to Pinterest