Britt finds out Peter is in the ER "More dead than alive" says Austin. She's like that's the only good news I've had LOL. Austin talks up Britt and her professional abilities. Weird. 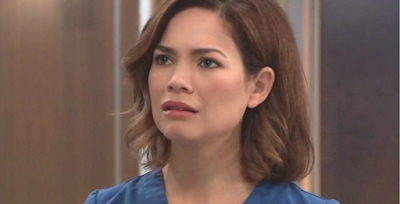 So Liz is ready to knife Peter and she flashes back to him being a jerk..then we are interrupted by CARSON Looking at their Christmas Tree!! WTF! REALLY? Ugh.. whatever. OMG FINN stops LIZ! damn it. UGH FINN!! Austin comes in. They leave. Austin sees the scalpel. Finn leads Liz away in a daze. She's not well. She wishes he wouldn't have stopped her.  She cries about Franco and Jason. But Finn says she'd be in jail and the boys would be left alone.

CarSon stand around and look at Christmas decorations. FFS. Avery and Donna come out. Sonny says he's going to be home this Christmas. Avery wonders why he wasn't home last Christmas. "It wasn't my fault" he says. "Who's was it" asks Avery--Carly gives big eyeballs. Later, Carly looks at the ornaments and finds a key chain that says "Caroline". (Jason gave it to her years ago) Sonny tells her it's ok to let him know her feelings about Jason. PFfffffff.t She says she puts it on the tree every year. They hang it together.

Sasha thinks Love can save Liam. Brando goes to find Britt and wants her to talk to he and Sasha. Britt explains again that Liam isn't going to do anything on his own. Sasha won't accept that. Thinks they can care for him. Britt is like: NO, no you can't. Brando realizes they have to talk him off life support. Sasha sobs.

Michael and Willow are at Brad's parole hearing. Ms Wu tells Michael Brad will never go near their family again. Michael says Brad will never see the light of day. Michael talks to the board and tells the baby switch story. Ms Wu is glaring at him. Brad gets up and says he's better than his worst mistake. Parole goes off to decide.

Stella sees Marshall. Curtis mentions the shock of seeing Marshall alive. "She thought you were dead". Stella: Um, that's not necessarily true".. OY!!  Then Marshall makes it sound like Stella didn't know he was live ...giving her an out if she wants one. Stella sits down and gets some water. Curtis tells Marshall to leave for good. Marshall thanks Stella for taking care of his family. Marshall goes to leave. Stella says no, that he's Curtis' only father. Marshall said he put Curtis and Tommy at risk every day he stayed with them. Marshall leaves. Stella apologizes to Curtis.

Finn and Liz kiss..Liz runs out

By kdmask - December 14, 2021
Email ThisBlogThis!Share to TwitterShare to FacebookShare to Pinterest