FRIDAY!! it's FRIDAY!! you all ok out there? 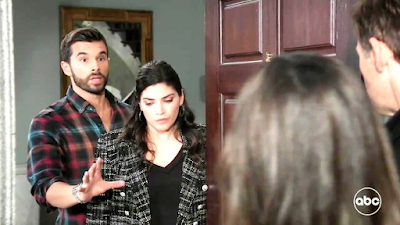 Valentin and Anna show up to the Q house. He wants to say goodbye to Bailey. Chase and he argue. Brook storms out. Goes and gets Bailey. Val holds her. She coos. Adorable. Oh! Maxie and Drew come in when Val is saying goodbye.

CarSon is going to see Brando and Sasha and Carly stops to bitch at Nina. Asks her why she's still there... tells her she doesn't know anything about Jason so save her "sorries'. Carly then marches off to 'cool off' and talk to Monica. POOR MONICA! Oh she only leaves her a voice mail. Thank goodness. 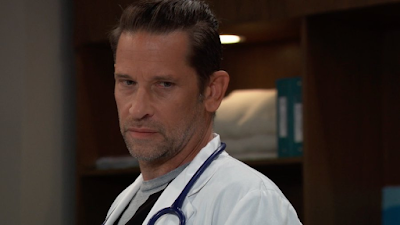 Austin checks Peter out. Pater remembers that Austin delivered his daughter. Thinks that Austin might know what happened to her. Austin goes to take blood and stabs him hard LOL . Peter tells Austin to stay away from Maxie. Why did Austin take that blood? To test Bailey? They sure showed a close up of it.

Sasha and Brando get a visit from the NICU doctor. She's called away on an emergency so Sasha explains they are going to do a EEG. Big nothing burger today. I think the baby will need surgery and maybe go to Shriner's?? It's that time.

Carly and Britt talk about JASON AGAIN. WHY? Why not show LIZ telling Jake or something?? GEEZUS enough of Carly. I'm so sick of her.

END:
AUSTIN tells Britt he wants to stay Peter's doctor to keep an eye on him.

OMG Peter talks to Nina about Falling in love with Sonny and CARLY IS STANDING BEHIND HIM!! AAAAAAAAAAAAAAAAAAAAAHHHHHHH Monday's show!

Maxie says "This is enough, lives have been destroyed" and storms out of the Q house. Not sure where she's going.

By kdmask - December 03, 2021
Email ThisBlogThis!Share to TwitterShare to FacebookShare to Pinterest