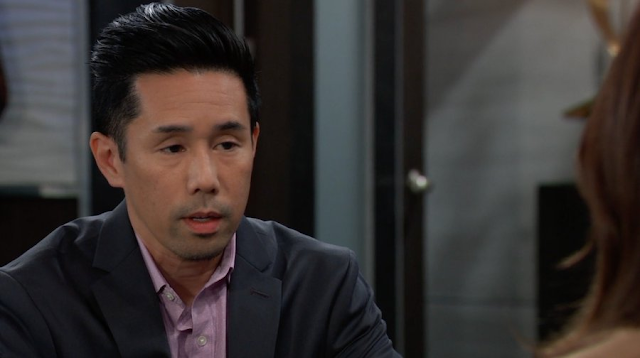 BRAD IS OUT!! Ms Wu doesn't like Britt...but Britt invites herself to sit with them at the Metro LOL "you been working out bestie"?? AHAHAHA Selina isn't happy. Britt and Brad talk about where he's living (With his Aunty) ... and Michael storms off the elevator WHAT THE HELL ARE YOU DOING HERE? He yells at Brad. Brad and he go to talk alone. Michael tells him there are no second chances with him.

Wu tells Britt Brad is going to get to know his family "Very well" this time around.

Chase and Finn are in the steam room--all OLTL Ford Brother type. Talk about Bailey and Liz kissing Finn. Finn says Liz ran away from him. Then Brook busts in and Finn leaves. She tells Chase the whole town hates her and he has to stick up for her.

Willow sees Brook and Olivia in the park. She was all snotty faced to Brook. Like SHE has a leg to stand on. Brook blasts her because Willow cheated on Chase when she was married to him! Willow says she kept her son from Shiloh to protect him, not for money like Brook did. Brook kinda cries because she can't tell the truth. Then leaves. STUPID WILLOW..ok, Olivia leaves too and then Harmony comes out to see Willow sitting by the tree. Willow tells Harmony she can visit Wiley.

SO Sam's PI gig is:  Todd Worth.. CFO of DNE Shipping Partners. Oil Spill...this is what Alexis is helping her with. Sam is looking for Worth's daughter. Alexis thinks it's the whistleblower he's looking for.  And KRISSY AND MOLLY ARE THERE TOO !!!!!!!!!! Anyway, Sam and Alexis argue a bit--Alexis doesn't think the PI thing will work. Molly wants her to review her opening statement for court. She's critical then backs off. Alexis gets anxious. I guess the PI thing is over. Alexis says she has to leave. I think she's going to an AA meeting.

Yoga with Terry. Liz is flashing back to almost killing Peter. She tells Portia and Terry she kissed Finn. "I didn't plan on it"!! She's still got her Franco wedding ring on.

END:
BROOK IS STUCK IN THE SAUANA with Chase

Willow invites Harmony to see Wiley at some point.
Harmony tells Alexis she can be her friend.

By kdmask - December 15, 2021
Email ThisBlogThis!Share to TwitterShare to FacebookShare to Pinterest