TJ at the hospital. He's discharging a sweet old lady...then Aunt Stella comes around and is so happy he's a doctor. Hugs him. She asks what Curtis is keeping from her. He won't tell her.

Drew goes to see Curtis at Savoy. They talk about Peter. Asks when he can take Jordan and Curtis out to dinner. He finds out about their marriage and Jordan's health issues.  He's going to help Curtis find out where his father has been all this time.

Anna and Sonny talk about Peter and his transport and CARLY INTERRUPTS: WHAT ARE YOU TALKING ABOUT? None of your fking biz, Carly (I said that, they didn't). Anna gets a phone call. Sonny tells Carly Peter 'doesn't have a future'.  Anna comes in, says Peter is going to the ER at GH . She leaves. Then Carly asks Sonny if he did it. He says he put the hit out on him.

Liz talks to Finn about Jason's death..which apparently she learned about off camera. OH! Jake too--and he's upset about both Franco AND Jason. Both killed by Peter. Finn and Liz hug. Stupid. This .. ugh. They see Peter come into the ER. They go stare at him in his portal thing. Anna and Maxie talk about Peter and Maxie is afraid he's faking. Finn says he's not faking. Maxie remembers back to her convo with Sonny. Everyone talks. Finn needs to wait for the toxicology report to treat him. Maxie wants to give an award to who ever poisoned him. 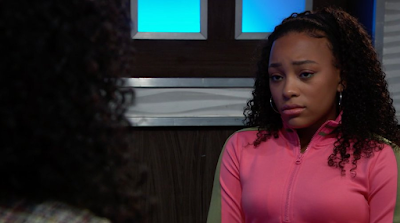 Mom Portia and Trina have breakfast. Trina feels like a loser. Everyone is paired up but her. Portia is like You don't need anyone to know you're worth! Marshall interrupts them. Portia introduces him as "Curtis' father". He leaves after a bit. Portia tells Trina he's "back from the dead". Trina says she can give Curtis pointers on that LOL .

Maxie and Epiphany talk about baby Liam and missing Louise. Epiphany tells her that they will probably want to be alone with Liam once they get the news: good or bad.

Brando's room with Britt telling them about Liam's fate. Oh little to no brain activity. No motor or cognitive function. Sad. Everyone is crying.  They go to see the baby in the NICU. Sasha says Liam WILL wake up. Ut. Oh.

Britt talks to Epiphany and thinks she may have given Brasha false hope. Because there is no hope. Epiphany tries to console Britt about giving parents bad news.

OMG Liz goes into Peter's bedside with a SCAPEL!! WOOOOOWHOO!!

Stella sees Marshall at the Savoy. I think he was in Witness Protection and she knew.

By kdmask - December 13, 2021
Email ThisBlogThis!Share to TwitterShare to FacebookShare to Pinterest