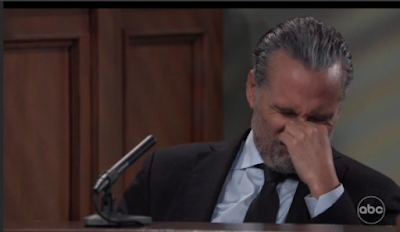 OMG The hearing is just OUT OF CONTROL!! Carly is yanking Sonny around! ahahahaa. Oh geesh, so... Willow tells about the whole Sonny-Nina thing but the DA asks if she ever asked Sonny about it. She says no. He also wonders if Nina didn't tell Sonny the truth because she was in love with him. Carly's just crying hard. OMG the JUDGE wants to hear from SONNY!! He's so into the story pffffffft. SONNY gonna have to testify! OMG so Sonny says he was in love with Nina as "Mike" and he doesn't consider himself her victim!! OMG!!

RECESS!! Sonny leaves "I'll make this right" (not sure how?) Michael thinks Nina planned all this to 'drop a bombshell in court"...Nina runs after Carly to tell her she's sorry..she didn't want this to happen. Carly runs out.

Nina yells at Scotty. Scotty is like I kept you outta of a hamster cage..you're welcome!! LOL

Brook and Chase watch Leo while Olivia and Ned go to the neurologist. Leo doesn't want to do anything but play with his spinner. Brook and Chase sit and eat. Brook says at the end of all this she's going to have to give up Bailey.

Hospital: Olivia is scared to talk to the doctor because she thinks she might not be able to provide for Leo what he needs. Doc comes out and ushers them to the office. He explains the diagnosis of Autism Spectrum Disorder and how they reached that conclusion. He says there are a lot of resources available but it they need time to digest the news. Talks about school and a program, and the journey ahead.

Curtis takes his Aunt Stella out for coffee and questions about Marshall. He says he never asked her before because he and his brother decided not to upset their mother or Stella. They made up grand stories about him but he sees now he's just 'a man'. Stella says he loved his clarinet "Henrietta" LOL.. and he was very generous.

Shawn and TJ in The Invader office. Shawn looks good . TJ tells him about Marshall being alive. Oh! Marshall comes in because he wants the Invaders' to do a story on his new band. TJ introduces Shawn as his dad. Marshall blows up because Shawn killed Tommy. Shawn explains that Tommy pulled a gun on him. TJ says it was his PTSD and he didn't get the help he needed.  Marshall blames himself for not being there. He leaves.

Later, Curtis goes to Marshall's room (Not sure where). Marshall was on the phone saying "I am following protocol" Oh I think he's an agent!! Curtis comes in.

Dr O and Britt talking about her love life. She got her a dating service gift card. Dr. O tells her about Nina and Sonny. Britt says that Carly gonna kill Nina LOL

By kdmask - December 28, 2021
Email ThisBlogThis!Share to TwitterShare to FacebookShare to Pinterest