Sonny and Peter. Sonny tells him he's going to kill him basically. Peter says his secret will be out if he does. Says he taped the kiss on his phone, it's on a zip drive and in the vault until he dies. They yell at each other.. Sonny tells him he'll kill him in prison when he least expects it. 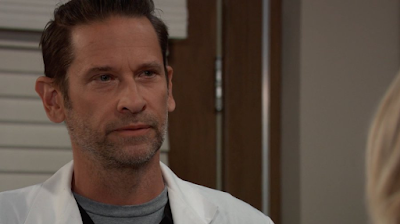 Maxie and Austin. She wants to find out how much Austin told Peter. Weird convo. Don't care. PLUS ORANGE SWEATER DAY 99.

Willow and Nina. Willow heard the whole "love" thing. Nina says it was out of context. Willow doesn't buy it.  She wonders if Nina and Sonny are still having an affair. Nina says no and they didn't really have one in Nixon Falls. "it was just love....it was just...love". Willow says Carly was right to say she was toxic. Anyway, Nina is wondering if Willow is going to tell. She begs her not to. Willow says she's not sure yet.

Michael goes to visit Brasha...gives them a gift. They want them to be Liam's Godparents. He says yes and he's sure Willow will want to too.

Gladys sees Liam..cries. Carly hugs her. The talk about the baby. Gladys hates the name Liam. "Must be a millennial thing" LOL Says it must be Sasha named him. Brasha come over and say hello. Gladys wonders when Liam can come home. They tell her about all his complications. She's upset.

Martin and Laura eating hummingbird cake "Your devotion to me is appalling" Says Laura to him AHAHAHAA. He won't let her leave. The fake cleaning lady gets the ok to go and clean the house. Martin wants to watch a movie "Christina Comes Home for Christmas" (a fake movie mentioned on OLTL years ago LOL)  . Laura says she can't because she can't go home for Christmas-- and see anyone. He convinces her to go take a long bath so he can watch the movie. She agrees.

Willow chickens out about telling Michael and Carly about Sonny/Nina

MS WU is on tomorrow!!

By kdmask - December 08, 2021
Email ThisBlogThis!Share to TwitterShare to FacebookShare to Pinterest