Wu comes into the Metro to talk to Sonny. She brings up Jason being gone. He has no 'guard' per se. Carly gets her big mouth in there about Brad not getting out. Wu just kinda smiles and leaves. Carly wants to know what the deal is. Of course she does. They talk about replacing Jason. WHO could ever replace St. Jaysus?? OMG If Carly grieves ONE MORE SECOND ON MY SCREEN...so.. they pledge eternal WUB and kiss.

Michael tells Willow he's going to the parole hearing to hopefully stop Brad getting out. Willow wants him to try to let Brad go.. but he's like NOPE.

Chase is going to take over Daddy Duty for Bailey so people don't suspect. So, Brook, Chase, Willow and Michael end up all awkward in the living room. OMG get this..Michael and Willow are mad at CHASE for making Willow feel guilty when they were "married" because he slept with Brook Lyn. Even tho..she was FAKE MARRIED TO HIM? God I hate these people. Anyway, Willow says she'll TRY to get past it.

MAXIE changed her sweater.  Then wasn't on the whole show. 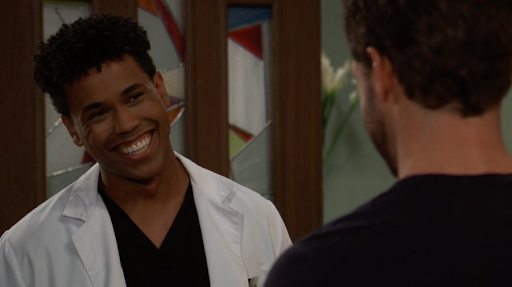 Sasha and Brando. Sasha has some beauty flowers in her room. It's the EEG day today. They are nervous. LUCY and Nina visit!! Eat Gummy Bears!!
Brando goes to the chapel. Prays. TJ is standing at the door. He wonders if Brando needs a friend. They joke a bit. yada yada.

Anna visits Peter. He said Sonny put a target on his back. She's like "He just got in line". She tells Peter to give up all rights to Louise and confess to ALL crimes. Maybe just maybe she can do something for him. He refuses. "Louise and Maxie make me human"..oh brother.

Nina and Britt talk about Nina using Dr. O in her Peter plan. Britt is mad at her because she didn't turn Peter in. Dr. O could have been killed and Jason is dead. Nina asks if she blames her. Britt says no, James wouldn't have wanted her to anyway (Nathan).

The EEG is back, the doctors look grave and sad

By kdmask - December 10, 2021
Email ThisBlogThis!Share to TwitterShare to FacebookShare to Pinterest