THE Coffee is ON THE COUNTER! 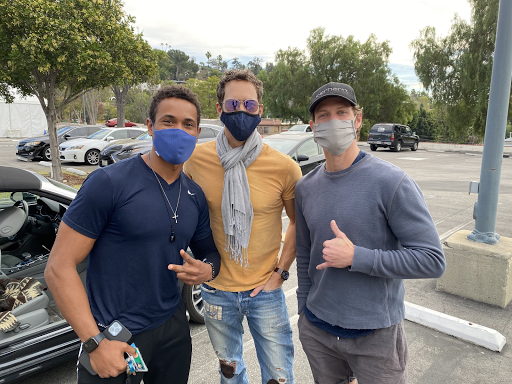 This was on Twitter..can you tell who they are?? Answers at the end!
HERE'S HOPING EVERYTHING IN THE WORLD CALMS DOWN SO I can see a WHOLE GH show!!

Sonny is at some hospital. Phyllis Caufield is his nurse! She was the one that knew where Nina's baby ended up, remember? He has on a Julian Jerome plaid shirt LOL The nurse loves to take care of people and she encourages him to eat. She's a good cook she says.  She notices he has a wedding ring on too and his coat was from a store on 5th Ave NYC. Stupid part of all this is she says that "there's no reports of missing people fitting his description".
REALLY ?? UM..REALLY??

Jason and Brick talk about Sonny's death. Blah, blah....catching people blah..They go check out a storage facility. Bunch of dead guys in there from a gun fight.

Alexis gets home, finds a bag from Ava with something from Julian's effects in there. It's a photo album/scrap book. She can't bear to look at it. She drinks.

Cyrus talks to Sam, tells her to tell her boyfriend to give back his mother. Sasha overhears it. Cyrus is all upset about his mother and says he only does what he does to take care of her.

Olivia tells Sam she's concerned about her mother. Sam's concerned too. Olivia thinks Tracy might have lied about driving off the road.  They visit Alexis. I tell you NANCY IS FABULOUS. WOW..Sam is figuring out that maybe Alexis wasn't driving that night.

Laura tells Cyrus about The Gray Family.  He's stunned. She tells him about her past. Now she has to find

By kdmask - January 14, 2021
Email ThisBlogThis!Share to TwitterShare to FacebookShare to Pinterest