WATCH THE SHOW TODAY DAMN IT! 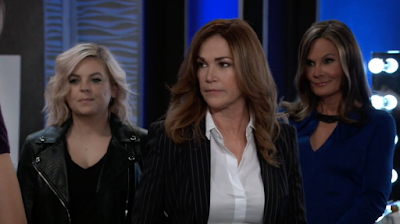 Rick Springfield was on GMA3 before GH was on. Jesse's Girl is 40 years old!! 40!! His voice still sounds amazing!!
So Nina sees the necklace on Sasha...she thinks Sasha did it on purpose to mess with her...Carly wants Lucy to stop the interview.
Meanwhile, Jackie is on full attack to Sasha about pretending to be Nina's daughter and a coke ho AHHAHA "SO you got hooked pretty fast"!!
NINA SEES THE NECKLACE, runs down from upstairs...at the same time VALENTIN SEES IT TOO!! Oh boy oh boy... After the interview, Nina asks Sasha about the necklace. Sasha says wardrobe put it on! Has no idea. Valentin says: "OH I THINK CARLY KNOWS"!! hahhaa. Carly is standing there looking guilty with Avery. Carly says she was trying to stop the interview because she knew it would upset Nina to see it. (liar) Nina says she wants to know if Carly knows where it came from. Avery says it's mine!! I'm sorry if everyone is mad. Nina asks her where she got it "When Mommy took me to the cabin" . Sasha gives Nina the necklace. Carly isnt' sure if it's the fake one she had made or the real one. We won't know until tomorrow!
Sam is yelling at Franco about his tumor. Liz is telling her to stop it. Alexis is in an exam room chugging vodka and eye-balling a needle. Franco says if he turns "bad" he will be put down.  Franco has a bad headache, starts falling...Alexis thinks he's dangerous and runs out with a giant needle to stop him and DANTE RUSHES IN AND SHE STABS HIM INSTEAD!!!! OMG!
Portia sees Dante whos' on the floor...she says to get him into the trauma unit. They are going to check out the contents of the syringe. Dante was seizing and his pulse is racing.
Sam screams at Alexis.
Chase goes to the floor that Dante is on. Jason overhears it. They go to the floor where Dante is. Jason asks Franco what happened. Franco said Alexis was trying to kill him and got Dante instead.
Dante has acute poisoning from the syringe. They have to stabilize him.
Chase asks Sam what happened. Alexis nods to her and Sam tells the truth. Chase Calls Jordan. Jordan is at GH and arrests Alexis.
Sonny comes back to Lenny and Phyllis' bar with a cop in tow. He wanted a job at the Hardware Store, they said no and he wouldn't leave.  He's leaving Sonny with Lenny and Phyllis to watch him. I think Sonny is crashing right now.  Phyllis says in order to stay with them he has to go see the mental health people because she thinks he has mania. Sonny says not seeing a head-shrinker. She says he can't stay there unless he does.
END: DANTE IS CODING!!
TOMORROW: Mac throws the book at Alexis at the PCPD! He has no sympathy!

By kdmask - January 28, 2021
Email ThisBlogThis!Share to TwitterShare to FacebookShare to Pinterest