I thought I'd list some up and coming reveals we have going:

Peter...all of his dumb ass stuff

What else? Oh, Dr. O is skulking around

That's going to take us through February right? 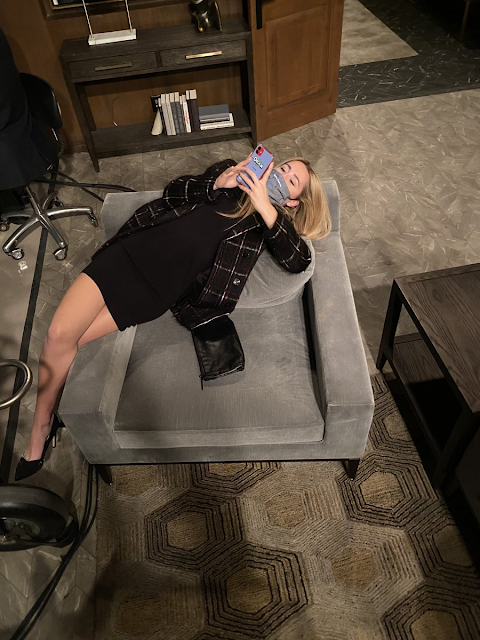 TODAY'S SHOW!! It's snowed here a lot! Looks pretty but I haven't had to do my car off in a long time. Wah.

Sonny at the bar. He's cleaning the tables like a mad-man. Oh, I think he's off his meds!! So he's going to be going a bit manic. Ok, he's REALLY manic. Wants to make a signature cocktail. Is going on and on....Phyllis figures out he probably has a mental illness. Lenny tells Sonny to either go to bed or get out.

Carly cries to Joss about Sonny.  Joss talks about the Sonny --Oscar's death. Misses Avery. She mentions Ava came by.  Carly doesn't react much about the necklace. Tells Joss it was ok it give it to her. Calls Jax really fast.

Curtis sees Nina at Kelly's. She tells Curtis about the Phyllis visit. He wants to help. She says she's not searching. He thinks she should search.  Jax leaves when Carly calls. Curtis wonders if Jax always puts Carly first.

Jax goes to Carly. Wants to tell Nina the truth.... Carly freaks out and says no, she'll get the necklace back and save them both.

Liason at the gym. "it was your dream come true to  kill Franco wasn't it"? She keeps blabbing, wonders how he'll know if Franco is dangerous enough. Tells him Jake loves Franco and don't take him away from him. She threatens Jason that if anything happens to Franco, he'll be sorry.

Olivia lays into Alexis. Alexis tries to apologize and she's not having it. You need to watch it all! GOOD SCENES

Ned yells at Tracy. She turns it around and says he's guilty of "criminally poor judgement" LOL Tracy, turning the tables! He thinks she came back to PC to run his life since Luke is galvanting all over the place and she can't control him.

Then, Ned goes to talk to Olivia and Alexis to Tracy . Tracy tries to tell Alexis that it was for her own good.

Olivia doesn't want to hear from Ned. He decides to leave for a bit. Olivia sobs.

Franco wants Scotty to represent him if he dies after coming out as "mean-Franco" . Wants him to get Jason off charges if he's arrested for his death.

By kdmask - January 22, 2021
Email ThisBlogThis!Share to TwitterShare to FacebookShare to Pinterest