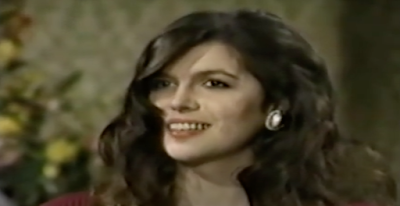 Many of you probably know that Finola Hughes starred in the moving Stayin' Alive with John Tavolta a year before she made her debut as Anna Devane on GH. I always had high hopes that John would someday cameo during a Nurse's Ball with Anna losing her dance partner and John's character just steps in and does the tango with her. I know, wishful thinking, but still it could be as cheesy as possible and I would gush over it.

Anyway, here we have Anna's first scene, where she plays someone fencing stolen jewels. Notice her hairstyle with most of her locks covering part of her face? That was covering her "penance" scar. Which was fake as Grant Putnam pointed out in an episode. She's had many adventures and this is where it all began.

ENJOY! NOTE: Today's Blog is by David who had this concept from the beginning!

By delcodave - January 02, 2021
Email ThisBlogThis!Share to TwitterShare to FacebookShare to Pinterest