I'm glad it's over!! Yesterday I had to get my hair done and I didn't realize it was a color too so it ran over. I watched GH on Hulu. 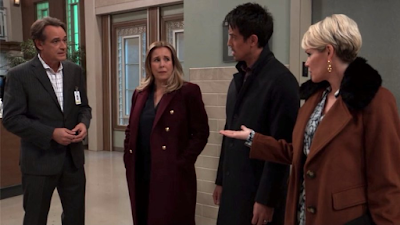 What happened to JORDAN? where did this acting come in? WTF?

Laura tells Nikolas about Cyrus.
OMG I see Kevin and Ryan and all I can think is they switched! LOL I'm conditioned! BUT Susan reminded me on Twitter about Ryan's missing hand LOL DERP.

I like the WSB connection with Anna, Dante, Robert and now Dr. O. OH Valentin is in there too!

And Jeff Kober is just so good as Cyrus..I love his facial expressions.

Ava torturing Ryan. He's going to be in a minimal security prison! Um HOW DUMB ARE THEY? He's so faking it. 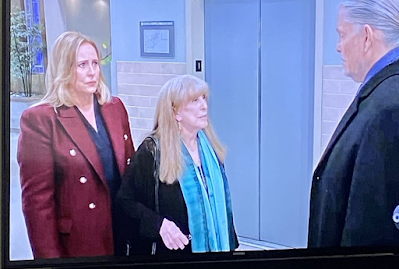 Jordan has Diane and Jason come into the station. Jordan talks about Florence. Diane leaves and Jason talks to Jordan alone.

Portia visits Taggert. Yells at him for doing what he did to Trina.

Laura  lays into Cyrus. She says to shut up and if his mother is with Jason than she's fine. They banter. He grabs her and LESLIE STEPS OUT OF THE ELEVATOR AND TELLS HIM TO UNHAND HER!  She knows he's Cyrus Renault and tells him to watch his shit because she's on the hospital board. HE says she's the tramp that slept with his father! OMG! SHE doesn't know who he is! She looks shocked!! LOL!! She finds out Laura is his sister. About faints. Pfft. Cyrus blames Leslie for his family trouble. She says he was her professor and took advantage of her. She walks away and Laura tells Cyrus to leave her alone. HE says to get his mother back "you wouldn't want anything to happen to YOUR mother, would you"??

Dante and Chase run into each other at the Metro. They talk and say they have to catch up. Chase goes to get a table for he and Willow.

Willow is all swanked out and is going to meet Chase for dinner. (Wooooo Lah Lah) They meet at the Metro. Willow says they can't just go back to the way they were. They talk and talk. Chase pours his heart out to her. They kiss.

Sasha comes to see Carly and apologizes for not letting her help. She's in in-patient therapy now. They talk and Michael comes in to tell Carly that Sonny is now 'Search and Recovery" meaning they think he's dead. Sasha doesn't know about Sonny so they tell her.

Sam talks to Peter about Maxie's wedding shower. Peter hates her LOL Sam's like: Um, I'm over it. He doesn't believe her. Storms out. Sam then goes to talk to Dante about hating Peter.  He says that he's sorry about Julian being dead.  Sam says she doesn't care.  He says they have to take care of their brother.
ME: ??? bROTHER? Omg yes, LEO is their shared brother ahahahaaaa.

Peter is trying to find Dr. Maddox because he's afraid that Franco will remember.

By kdmask - January 08, 2021
Email ThisBlogThis!Share to TwitterShare to FacebookShare to Pinterest