MONDAY AGAIN! a HOT one here!! 90 something... but it's August so there you go. Virgo season has started. That means watch yourself LOL

I've had a rough day, not sure why just blah. Going to start work in 2 weeks and still unsettled.

Turning Woods calls Sonny. Mike watched a video of an old Nurses Ball when he and Sonny sang together. He smiled.

JaSam at the hospital. PCPD says the stablizer on his motorcycle was tampered with.

Jax and Nina talking about the Ball at the Metro. Nothing really.

Q House, they realize Wiley is gone and someone took him. Julian dropped the rag with the chloroform on it.

Olivia and Ned at the hospital. Chase wonders who would hate Brook enough to do it.  They tell him about her former manager.  Brook is in surgery 'barely alive".  Ned is feeling guilty and terrible.

Julian threatens Nelle on the docks. Nelle reminds him that Martin Gray has the document telling everyone about Wiley and Julian's part in all that in case something happens to her.  He goes to shoot her and TAGGERT SAVES HER. He and Julian fight ... Julian knocks out Taggert then throws the gun in the river. Nelle is gone.

Julian goes to the bar.. Sonny comes in and says "Where you going"?? He asks about Nelle. Julian says she's crazy. Sonny says he knows he helped Nelle get away.

Nelle is driving away in the van. Wiley is in the backseat. Cop car comes up on them.

Nelle bought a used car so no one can find her.. she drives off into the night

By kdmask - August 24, 2020
Email ThisBlogThis!Share to TwitterShare to FacebookShare to Pinterest 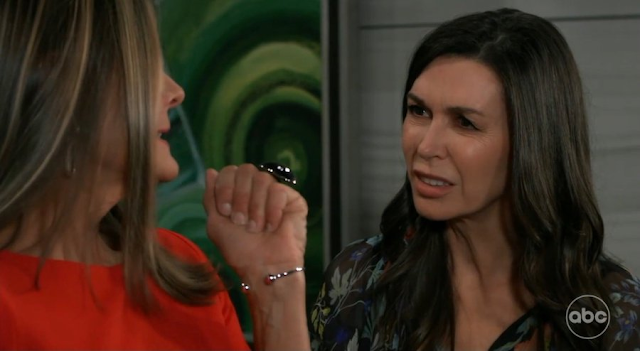