Here's the NEW PROMO for the BUS CRASH! Looks pretty good-- better than the real thing?! I just WISH they'd use the correct interstate numbers. That's all.  LOL,  I'm picky. When I saw Steve Singin on his guitar, I thought of  the movie "Airplane"!! ahahahaa. 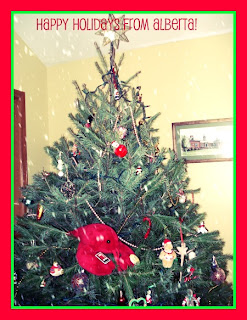 ALBERTA'S HOME for the Holidays!!
Today was promised to be THE BALKAN REVEAL DAY!!
The whole show was stupidly confusing. First of all,  Siobhan thinks Jerry is The Balkan...everyone assumes he is. I'm still holding out. The baby thing hasn't even come up yet. It's a distraction, I'm telling you. See below. I KNEW Jerry would make a phone call at the end.

Brooke and Nik..."Nookie".... whatever.. " Paid companion" WTH is that sheeze?  Liz and Steve go out and see them at the Metro Court's horribly decorated restaurant. Brooke Lyn did bring up the fact that Liz has three kids with three different fathers. Liz didn't even bat an eye.

So...Alexis and Diane hire Theo who was sent from the "NYC Office" .........WHAT. Okay... makes no sense but what the hell. We'll roll with it. Did Diane have on red carpet make up or what?? It was WAY overdone!!
ALKAZAR mention-- and Alexis' involvement in that whole thing.

Jax wants to shoot Jerry and Carly won't let him?? She's always trying to get people to kill other people. LOL Then Jax goes to talk to Brenda about killing Jerry. I am falling asleep.

Lulu and Lucky ....good scene but randomly inserted. Siobhan's sister, Fiona calls breaking her 'cover' and not knowing she did so. Another Oyrish accent to deal  with. LOL

Another thing, isn't anyone wondering about Sam? Wasn't she the last of Jerry's obsessive women? LOL..you'd think they'd be all over protecting her.

AND yep, THEO IS THE BALKAN!!
By kdmask - December 17, 2010
Email ThisBlogThis!Share to TwitterShare to FacebookShare to Pinterest