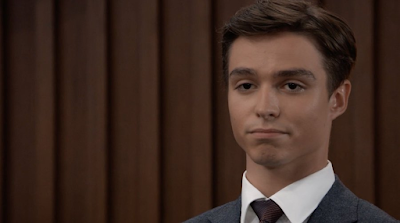 WELP! Here's hoping today was as awesome as yesterday!! It was so good. It moved so fast--they really could have spread a bit out over the week. LOL

Michael pretends to yell at Dex so Brando isn't suspicious.  He's not and Dex leaves.

Sasha thanks Willow for being such a good friend. Willow goes with TJ to give blood. Michael comes in after, all happy. They talk about life and how 'good it is".

Sasha and Brando argue over her not going to therapy. He gets really mad and tells her she has to go..she says he's controlling her. She leaves--I NEED SPACE. She gets a text from "Sienna" and it says "wanna party"?? I think that's the girl in Kelly's that Sasha met to buy drugs from.

Brick and Sonny the gym. They talk about the West Coast Mob. Sonny says Dex could be another Jason. Dex comes in. Talks about the photographer and telling him not to talk to the police. Sonny and Brick are like THE POLICE WHAT? Dex says he didn't let them see him. Then Sonny tells Brick how Dex talked Joss out of turning in the video. Dex leaves. Brick thinks he's too cocky. They show Dex looking at WILEY on the phone?? OMG is he his REAL FATHER MAYBE?? I mean, why would he be looking at that kid? Why would he look at WILEY? Oh I HOPE he's the real dad!! LOL it would be amazing. NOW people are saying it was MICHAEL looking at that photo. I watched it twice and I swear it was Dex LOL

Esme and Ava--GLORIOUS. Ava says it's a new low for her to sleep with her boyfriend's father. Esme says How did MORGAN feel when you slept with his father? How long before Avery finds out she was a product of Hate SEX!! AAAAAAAH! Ava grabs her arm to stop her leaving.  Esme tells Ava it was her own fault Nikolas slept with her. She was cold and Esme was there to pick him up when he fell. Ava starts to realize Esme knows too much about her past..and it "feels personal"... WHY? Then Esme glances to the envelope in her bag. Ava's still trying to figure out what Esme's game is. Things go on and Ava grabs the letter but Esme gets it back. Ava says she doesn't even care and wants Esme to MARCH DOWN to the courthouse and get Trina off. Then she basically says if she doesn't, she will end her.

Spencer is on the stand. Nikolas walks in. Spencer tells everyone that Trina couldn't have distributed that email because she was with him at the time. Diane asks how if he was locked up. He says he arranged for a unauthorized Day Pass and escaped. He talks about why he went to visit his mother's grave to leave flowers. Diane says you could go to prison if you admit this. He says it's time to do the right thing, not the easy thing. Diane asks about other things but finally Spencer says that Esme Price did it. (in his opinion) Then the ADA proves and email can be scheduled to be sent anytime. She proves it by sending one to everyone in the courtroom at the same time.  Spencer leaves the stand. Tells Trina he's sorry it didn't work. Joss tells Spencer she's glad he finally did the right thing. Nikolas tells Spencer he wants to talk to him!

By kdmask - July 29, 2022
Email ThisBlogThis!Share to TwitterShare to FacebookShare to Pinterest