You are your Father

Drew's guard guy is Australian sounding... Drew tries to bribe him to get him out but the guy says nope. He has a fake flashback to talking to Scout.

They realize Spencer couldn't have set Ava's car on fire because he's at the mansion. Laura lays into him. Spencer does a GREAT job with acting hurt and everything with Nikolas. Great job for a new kid. Carly is on Spoon Island with Joss and Cam, reconning the whole story. CARLY SHOULD BE AT THE FIVE FAMILY MEETING!! DAMN IT.  Spencer goes off with Trina to the parpet to think.. CARLY BARGES IN AND YELLS AT SPENCER!! WTF!! GOD I hate her. "I had something important to do and had to come here for my daughter"!! She stomps out.

Parapet: Trina and Spencer ...she talks to him about his Dad. She doesn't think Nikolas hates him, just wants him to learn something. He says he's innocent of everything. They almost kiss but Cam comes out. Wants to know if Trina wants to leave. She says no.

Five Family meeting: Carly is with THE KIDS and Ms WU wants to know where she is. Jason's like; Busy. Of course Carly isn't there. They are pissed. Jason is like: Deal with IT. He tries to say he and Carly are a united front. This is just a wasted scene without the two of them together, imo. Oh, Ms. WU is really not happy with this. 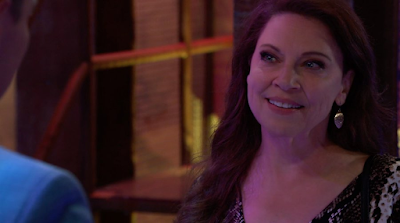 Liesl talks to Jax at The Savoy. Wow, he really doesn't have any friends. He's wondering why his phone is messed up. LOL Can't figure out Spinelli wiped it clean.

THE FIVE Families walk out when Carly shows up. I think Jason had to set a date for the wedding.

By kdmask - August 18, 2021
Email ThisBlogThis!Share to TwitterShare to FacebookShare to Pinterest