Liesl tells Nina to get Peter to go to a town in St. Lucia. Meanwhile, MikeSon is yapping at Peter. Peter says "I know who you are" but it's a fake out-- he says he means he knows the type of guy Nina likes. He says that MikeSon is a charity case-- and MikeSon comes out from behind the bar with a baseball bat. LOL Of course he doesn't use it. Nina gets him outside and tells him that the Maxie is in St. Lucia. He questions her then says if she's lying she will SUFFAH!! 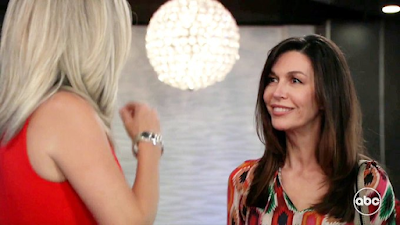 Carly daydreams about Jason giving her the ring. Anna walks up. Tells her she and Jason remind her of she and Robert. "We didn't last long of course"///

Brook Lynn is at the pool with the baby, Maxie walks in "HELLO"! They talk about stuff. Nothing major. Austin comes over, tries to talk to Maxie. Brook says buzz off. Maxie explains that every time she sees him she thinks about Louise. He says sorry and leaves. Brook thinks he likes Maxie.

Valentin gets cornered by Scott and Austin "why should I vote for you for CEO OF ELQ"? Yada yada... Val basically says he's the best option.

Shawn is visiting Alexis in jail. Sam walks in and says Drew called. She thinks the WSB file will be helpful. Dante calls her and tells her he found something.

Anna gives Dante the WSB File at the poolside. Then Dr O walks in and probes Anna about Peter. (Not telling her she knows he's alive) She wants Anna to keep an eye on Maxie while she's gone.

Sam finds Dante at the bar. She, Anna and he sits down. He says that when Drew chartered a flight, there was another passenger on there. The seat was paid for by a corporation that turns out to be NINA Reeves!

Jordan talking to Jason about the wedding and inviting the 5 families. She's afraid Cyrus might do something. They wonder if someone in the five families is working with him.

Lucy is trying to get Gladys an apartment but she's very picky. Gladys is basically a pain in the ass to everyone. She wants an invite to the wedding. Carly's like: NOPE.

PFFFFFFFFFFFT! Lucy heard Dr. O saying she was going to St Lucia with Scotty and she goes over to him, calls him a Nin_come_Poop and SMACKS him on the forehead!! ahahhaha It was hysterical.

END:
Dr O and Scotty on a private jet leaving the country.

By kdmask - August 30, 2021
Email ThisBlogThis!Share to TwitterShare to FacebookShare to Pinterest