Chase comes into the Q house, asks where Willow was.  He asks if Michael found her. She says yes he calmed her down. Oh, Chase is going to play cat and mouse with them for a bit. He gives Willow a chance to tell him the truth but she doesn't.

Chase wants to pack and leaves, Austin talks him out of it.

Monica talks to Carly alone. She basically says ok and welcome and yada yada. Then Cameron tells Carly he wants to tell her his intensions toward her daughter. He's such a dweeb. Carly says ok but she lays into him about picking up a gun. :EYEROLL:

Stella is sorry and talks to Curtis. She tells him Trina found out about the affair because of her. She says that she never got another chance with Marcus (that old boyfriend). Curtis leaves. Stella is still crying.

Trina accuses Portia of breaking up their family. Wants to know why she didn't say anything. Trina says she was selfish not to tell her. Portia tells her she's her mother.. and sometimes she doesn't want to talk about things. Trina thinks Portia might still be in wub with Curtis. 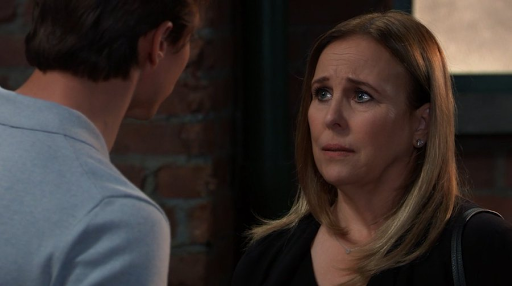 Laura wonders why Spencer isn't taking his gap year and traveling. He said to make things better between he and his father. Then he takes a dig at Kevin. Weird. Then he calls Ava common LOL. Then Joss and Cam come in. They diss each other. Laura tells them to calm down.

Harmony is a health aid at the Spa-Jail. She says Ryan can process everything that is said to him but can't move..or speak but he "can" communicate. They do eye blinking stuff. Alexis is thinking Harmony is back to her cult ways and is tending to Ryan for that purpose. Harmony says it's only her job. Alexis tells her she hasn't forgotten her part in the Shiloh mess and Kristina and Sam.

Chase is going to stay and fight for his marriage. He makes Willow kiss him in front of Michael

By kdmask - August 04, 2021
Email ThisBlogThis!Share to TwitterShare to FacebookShare to Pinterest