Sheets to the Wind!

Austin finds Michael's shirt under the couch and shows it to Chase before he goes upstairs. Oh he finds the BELT TOO!! Chase starts to stumble upstairs. 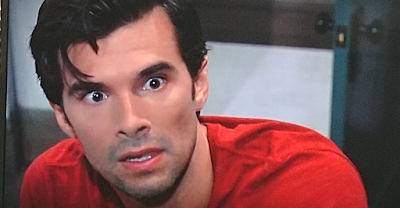 Mildew make DA WUB. They are in bed...talking. "I love you...I love you too"... Chase never makes it up. Austin tells him not to look. Don't let them take your progress away from you. Stupid. Whatever. Chase is going to know and not tell them he knows.  Willow and Michael come down and go to the party. OMG Chase and Austin were hiding in the closet!! Chase wants to go upstairs to LOOK AND SEE for himself if they slept together? WHAT? Like look at the sheets??? OMG Austin finds a condom up there OMG. lordy

Nina facetimes Wiley but Sonny wants to talk. Nina hangs up. "WHOOPS, Call dropped"!! Then Phyllis walks in and says Lenny isn't coming home. Oh, he's not coming home TONIGHT!! Nina and MikeSon are going with her to be with him. Phyllis talks about a rift with her family-- I bet she's related to Stella.

Jordan tells Curtis she didn't want their marrigage to end. Um, no shit, she's said that all along. They've talked about that 100 times.  He loves her but doesn't want to get back together. yah, we knew that.

Spencer interrupts Joss and Cam at Kelley's. Blah blah...BLT, he's snotty about his coffee to Cam. Why is Joss putting up with him? The only way to save this is to have Joss and Spencer do it in the pool.

Portia and Stella... Trina overhears her mom cheated on her Dad (Taggs) with Curtis. She's stunned. Portia sees Trina and Trina runs. She goes to Kelley's.  Cries. Sees Spencer. Says her mom didn't tell her something.

I really didn't like today's show. But.. that's me. Hope you did!

By kdmask - August 03, 2021
Email ThisBlogThis!Share to TwitterShare to FacebookShare to Pinterest