Stella is in GH and TJ is holding her hand. I guess Cam called 911 and it was all done off camera. He learned the signs of a stroke from Liz and knew what to do. Cameron is upset because she wanted him to mail the envelope but coffee spilled on them and the waitress ended up throwing them out (they were the divorce papers).

Stella wakes up. Talks to everyone..says it's her fault she had the stroke and she's not going to be a busy-body anymore. Curtis asks her if she knows what was in the envelope that got thrown out. She doesn't remember. And I don't think she's lying. 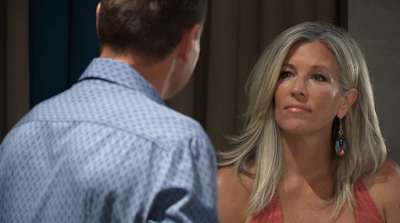 Jax and Carly talk about her upcoming marriage to Jason. Boring.

Terry and Britt talk about working together; or not. Terry apologizes to her but Britt is like...good try. Terry asked her to think about it. Britt goes to the pool and sees Jax and he tells her that she should take the deal "Half the work-load".

Brook and Sasha talk about good sales at Deception. OMG Gladys is BROOK'S NEW ASSISTANT! and all glammed up. It's pretty funny. WE find out that Gladys was in an MLM lol.

Boxing with Jason and Brando. Brando talks about becoming a father. zzzzzzzzzzz

Joey Novak confronts Joss at Kelly's and says he's happy she's on the PCU volleyball team and he'll cheer her on. She tells him to get out, then Cam asks him to PLEASE get out LOL Joss goes to tell her mother and tells Cam to stay out of it 'it's family business".

Cam goes to the gym and Jason gives him boxing tips. UGH

Britt decides to accept the job and she and Terry go to talk to Monica together.

By kdmask - August 05, 2021
Email ThisBlogThis!Share to TwitterShare to FacebookShare to Pinterest