Sunday Surgery: Panic at the Disco

This week's GH kept me mildly engaged. It wasn't a big week for things happening but I did have glimmers of hope in there now and again.  We had two character deaths which is always dramatic.

I should have saved that title for next week but damn, I loved it. Spencer's "party" was surely something out of the budget bin. I'm having a White Claw because clearly those poor kids can't.

One step closer to Hayden I think...and I also believe I solved the puzzle that's coming: Victor Cassadine. His suit matches the suit that killed Naomi and he had a mention from Liesl. There are still plenty of happenings I'm not into but we'll be less snarky this week. Maybe.

KITCHEN CHAT OF THE WEEK:  Take your pick: Carly talks to Jason...or... Carly talks to "Sonny". Either way, the MOSS WAS THE REAL STAR!! Oh my, what a mess this has turned into. Carly talks to a (in her mind) dead Sonny about FAKE marrying Jason. Good God woman, it's supposedly a FAKE marriage. Do you and Jason really fear marrying because you know you'll want to hop in bed and be all "my soul mate"?? I mean??? I don't get it. What started out to be a great possibility of so many things has turned into angst and guilt where there didn't need to be any. Just look at the Britt-Jason scenes to note ever MORE angst. You weenies are marrying to create a pretense. Get on with it!! Rejoice in the whole thing.

NEW CUTE OF THE WEEK: Oh my goodness! DONNA! Look at you!! Sonny's genes are just shining through in  your little face!! I thought at first it was scout but nope, it's Donna--she who lives upstairs. She called Jason Daddy--which of course caused major turmoil with Mr. and Mrs. Jarly. Will she ever remember her bio-Dad?? I guess it depends on when Nixon Falls will be over. 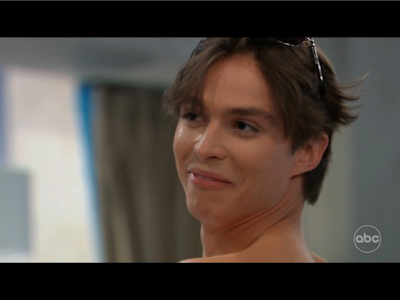 SASSYFRASS OF THE WEEK: Spencer continues to grow into his part as a Cassadine. While he's busy lazing at the pool, staff is getting ready for his "epic party". Oh, "rager" as he's calling it. He continues to have the best chemistry with Britt but we know that's not appropriate in 2021 so stop thinking that!! He's about to get caught by ol' Daddy and I can only hope it's 'epic" in it's own right. 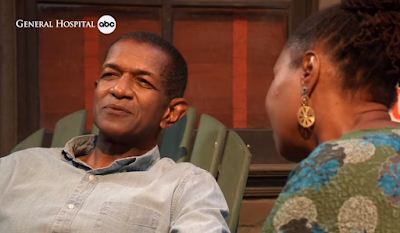 DEATH OF THE WEEK:  Lenny bit the dust Friday while looking at the sunset on the Tan-O porch. That ended up being quick in GH time didn't it? Of course, the acting was good and it had all the feels. It STILL hasn't gotten us closer to getting out of the Nixon Falls Spin-Off Show but what are you going to do? It's also painfully clear about that bar being empty 24-7. I mean seriously.  Oh and Nina? Yeah, she's still thinking Her MikeSon is going to end up being her "Lenny and Phyllis" Story. :eyeroll:  I want Phyllis to be Stella's sister. It would fit. Notice the segue there!! 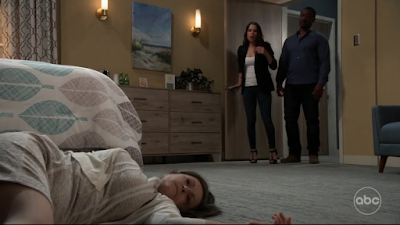 DEATH OF THE WEEK 2:  Naomi ends up dead on the floor of her motel, killed by some guy in a suit (I'm saying Victor Cassadine) before she can tell Shawn and Sam the real story about Hayden. They did get a clue when she mixed up her middle name but it was too little, too late. Now that they know it was murder, the plot thickens. 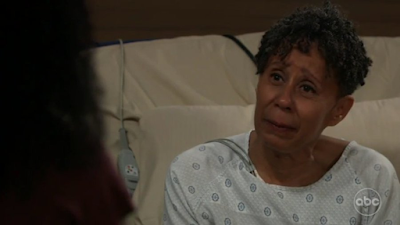 FORGIVEN OF THE WEEK: Stella wakes up and everyone is in a forgiving mood. Curtis offers her a place to stay, Portia and Jordan are all being nice and even Trina visits. Aunty still doesn't remember she didn't send the divorce papers but...?? I'm trying to figure out how this is dramatic. If she had a stroke and doesn't remember and everyone has forgiven her for being a busybody, how will her stealing the envelope be anything major? She was going to mail it--doing the right thing. Right? Plus the fact when it's not filed, they'll just refile it--right? It's not going to bring Jordan and Curtis back together, is it? I don't get it. I just don't get it. 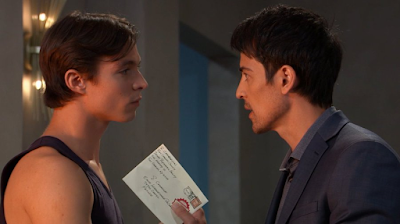 LIGHTBULB MOMENT OF THE WEEK: My Son is My Stalker!! Nikolas finally realizes that Spencer was the one behind the whole thing and what does he do? Talk to him like a normal father? Nah.. he's a Cassadine!! One must fk with ones kids as much as possible!! So.. based on the camera work on Friday, I guess he's 'stalking' the party and wants to do something nefarious during the shindig. Even Ava knows that's a dumb idea.  I would like to give props to the props department on the cancel stamp on that letter. Perfecto! 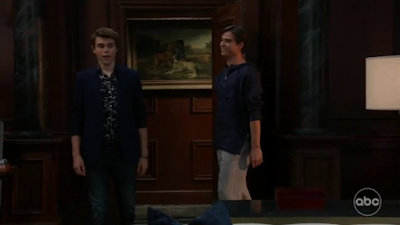 LAME OF THE WEEK:  I knew it. I KNEW there wouldn't be an real party-party. This could have been done so well. Maybe I'll be wrong and it will unfold into some really great teen-summer-horror flick next week. So far the budget didn't even pop for some extra catering staff running around. We did hear some piped-in Sirius type 'hits' from the "DJ" but other than that? ZIPPO. Such a let down. It COULD HAVE BEEN ICONIC. 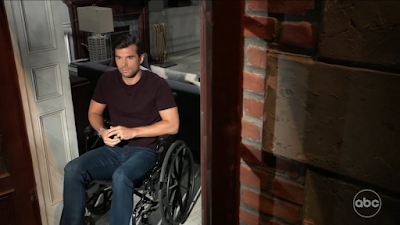 CHASE FACTOR OF THE WEEK:  Chase had a choice: Either decide to leave his sham of a marriage or stay and screw with Millow's emotions for awhile. Good ol' Austin talked him into the latter and he's going to not only pretend but I believe he will search for Edward's notes on the Will. At least this gives some hope to this drawn out triangle. Michael and Willow continue to be as hot as an pint of vanilla ice cream. Speaking of Vanilla: 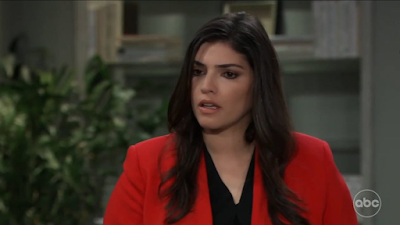 LINE OF THE WEEK:  Leave it to Brook Lyn to call her cousin Michael "Vanilla"!! We all are saying it and someone finally wrote it! The line tho goes to Willow who says: "Michael is anything but vanilla" . Thank you for that giant belly laugh. I died. 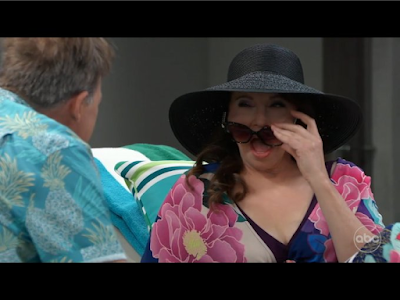 SCENE OF THE WEEK: Oh...who doesn't love Scotty and Liesl?  They are just adorable and fun and funny and everything summer should be! They are off to "St. Lucia" where it's rumored they are captured. (Victor Cassadine again?). A fun adventure I hope!! 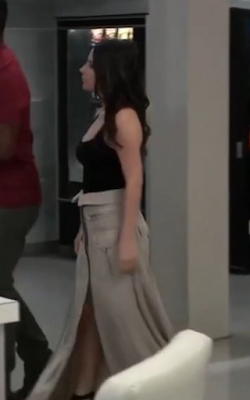 WHAT THE WARDROBE OF THE WEEK: Ok, if you saw this, you did a double-take I'm sure. I wore oversized denim skirts in the 80s...but this? THIS is... something else. And Kelly is to tiny it just made your head spin.  It's a cargo skirt. A GIANT Cargo Skirt. pic thx to @buyingair

Felix makes a cameo appearance to reminisce over he and Liz' days as student nurses.

Nikolas realizes it's Spencer that's been stalking he and Ava

Austin wants Edwards notes on his Will and uses Chase to find them.

Naomi is murdered by an unknown person; Shawn and Sam vow to find out why

Liesl and Scotty decide to travel to St. Lucia where she wants to find a cure for Britt

Jason and Britt discuss their angst over not being together

Carly talks to "Sonny' and gets his blessing to marry Jason

Lenny dies at the Tan-O after returning from a biopsy

Spencer gets ready for his party at Wyndemere

Jax isn't happy that Joss is in danger 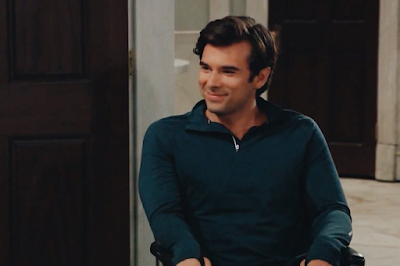 SPOILERS:   Jason and Carly set a wedding date, Laura is angry with Nikolas' tactics, Chase "investigates"  and Ava talks to Kevin about Ryan. 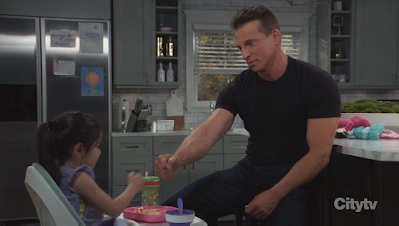 NEWS:  Welp, Steve Burton took to IG to cancel a planned event with Bradford but has tested positive for COVID. He says don't worry: "I feel fine"... but I guess I'm more worried about the people exposed. Burton says he was exposed 'on the set'...no word by whom and if people are vaccinated or not. Could put a huge wrench in things because he can't come to work for 14 days.

Genie Francis got out just in time I guess! She's taking a bit of a vacation but will be back in the fall.

August 18th is the date Drew Cain (Cam Mathison) is back on canvas. 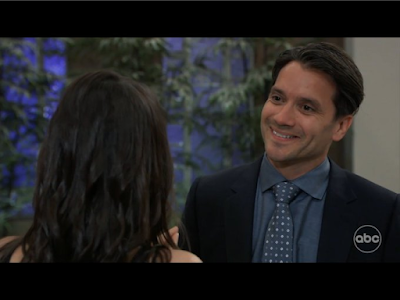 And that's it!  I have this week to go before vacation, I'm hoping it's a good one!!  My prediction for the party: Nikolas cuts all power. Sending everyone into darkness. The launches can't land, the DJ can't play and the kids skuttle in the dark. Are you looking forward to NuDrew? I believe he'll be show in a prison somewhere--or a prison type room. Not sure how long it will take him to get back to Port Chuck.

By kdmask - August 15, 2021
Email ThisBlogThis!Share to TwitterShare to FacebookShare to Pinterest