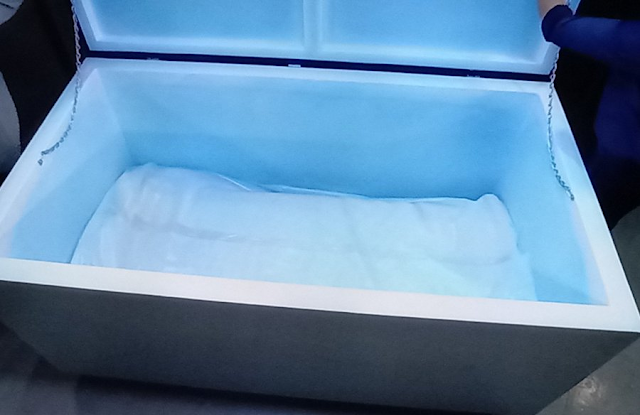 You sure you want this? I'm not sure I want this!! Tough week for me while watching. So here we go-- THE EMPTY OF THE WEEK:   I.D. Channel eat your heart out!! After what seemed to last for days (ok, it DID last for days)  PETER IS GONE!! Jason looked: Empty. Finn and Anna looked: Empty.  Audience: Yep: YOU EMPTY!! As Valentin said: "Either Peter walked away or someone moved him". Speculation runs from Austin to Dr. O to Jerry Jacks (you wish!) to Robert to Valentin himself.  Do we care at this point? I'm not sure.  Maybe Helena took him. All I hope is that he's dead-dead.

PARTY OF THE WEEK: Wiley's space themed party was going on at the Q household providing us with many cast members on the same set. The two that weren't were Willow and Michael who were so turned on by Wiley's gift-wrapping that they made out. Carly and Jason interrupted and noticed something going on. The audience however? Meh... I usually like these "deception to save someone else raging hormones for the other guy" stories but lord.  The feelings are like what I got on my chemistry exams: Failing.  On to Chase who's trying to walk upstairs by himself --I guess to surprise his 'bride". He stands and walks 2 steps.  Great. How long this going to go on? Austin saw him so that's something. 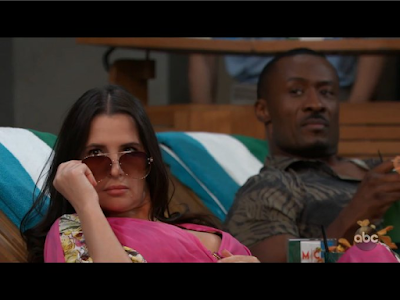 POOL TIME OF THE WEEK: Everyone was at the pool!! Cover-ups! Hawaiian Shirts!! and the highlight of all this? Spencer gets pushed in again by Joss. Oh, yeah, Spencer also agrees to a "rager" at Wyndemere. PLEASE watch UK Skins and let it rip, ok? PLEASE? And pop for some House Music.  Thanks. I think the last time there was a party there Cam started a fire? 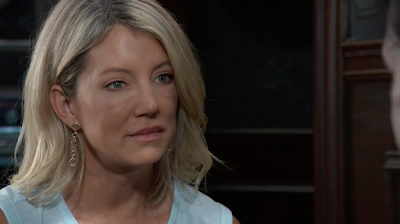 NIXON FALLS SPIN OFF:  Nina and Sonny are all drinking beer in the empty bar (shocker) and getting all re-flirty and I think they kissed.  Meh.  Not much movement on Lenny.  MB was on The SOD podcast saying he loved playing Mike. So. There it is. 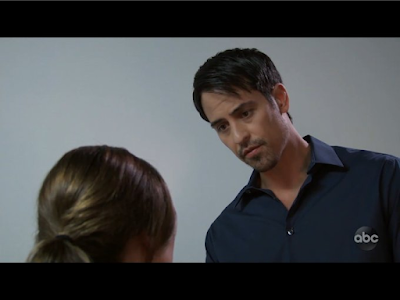 ELEPHANT IN THE ROOM OF THE WEEK:  Nope. Nope. And What I will say is that if you didn't see it; now not only does every person forget what happened with Shawn,  there are nice fake-flashbacks to assist you!! Should have left it at Shawn gets out and the judge was a racist. That's it. The few people bitching about "the real shooter" would have shut up and forgotten.  Now there's a whole arc I have to sit through. Nope. Don't expect me to talk about this much.

NOTE: I have never done this before but I'm linking another blog here because the break-down of who knows what (even SHAWN knew) is perfect. Go read: Serial Drama  for all the details. BTW, if Shawn knew and still took the fall, why go through this? WHY.... 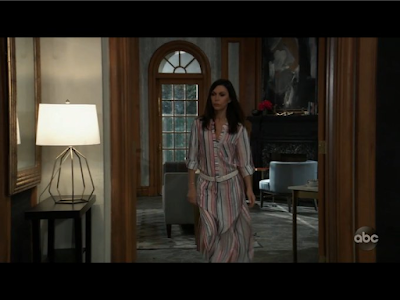 DRESS OF THE WEEK: Everyone was happy to see Anna in a shirt-waist summer dress!! yes!! Olivia also had a pretty new number. Carly had on a pretty one for the pool and party.  Poor Brook, still stuck in a black cat-suit and giant blazer.  I mean at LEAST get her a summer linen jacket. 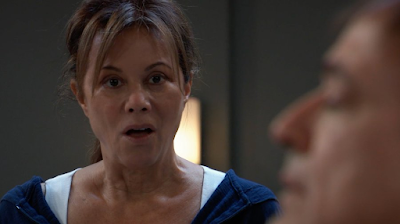 SCENE OF THE WEEK:   If I have to pick one, I'll take Ryan and Alexis. Two great actors. One can't move but he's still fantastic. 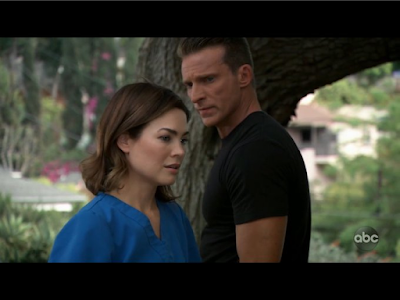 Portia and Curtis: In a relationship or still talking about it months later?

Spencer tries to make up with Ava; pretends he cares

Joss pushes Spencer in the pool again. Carly reminds her about insurance liability

Ryan doesn't move but he hears

Liz tells Jason about Peter, but Peter is gone

Finn tells Anna about Peter, but Peter is gone

Dante thinks Anna's not telling him everything

Wiley has a party, he's not there yet.

Willow and Michael kiss; Carly and Jason give them advice

Shawn is going to work at The Savoy for awhile

No one remembers who shot Hayden except some do but it's not the same as it happened so don't ask me what's going on. 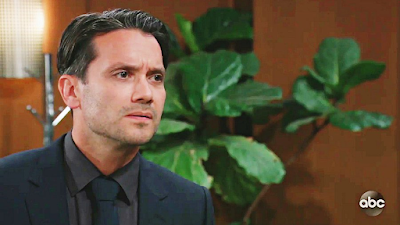 SPOILERS:  Shawn finds Naomi,  Laura talks to Dante about Lulu,  Jordan wants Curtis back and Monica gives support to Carly. Find out all the skivvy on Diagnosis Daytime. 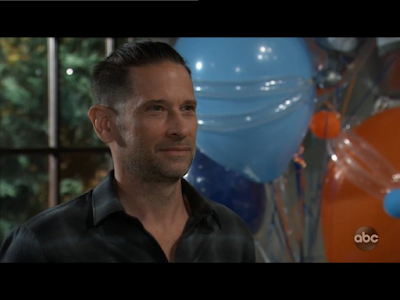 And that's that! I've said this before; watching a soap is like reading a great novel. Meaning; you rely on history to enjoy the story in the present. I've lived through a lot of rewrites; minor and major. NOT a fan, especially when they are this recent.  More bitches: We don't need Gladys. We certainly don't need Harmony unless she's the one that took Peter. Nixon Falls...? Whatever. We should be planning Carly's giant-ass'd wedding. Oh, one more thing, give it up for the balloon people--they've been doing it up!

All photos thx to Twynk!!

By kdmask - August 01, 2021
Email ThisBlogThis!Share to TwitterShare to FacebookShare to Pinterest