Laura is in GH going to dinner with Kevin but until he gets here, she's going to talk to Liz. Wonders if Liz is going to tell her Dad about Naomi. Liz isn't sure. Laura says she can email him. Liz really wants to find and tell Hayden.

Ava's at GH and thinking about Ryan pretending to be Kevin. But she sees Kevin and he says Ryan can't move. They talk about Spencer possibly being the stalker. Laura comes in later and Ava tells her the details about Nikolas' plan. Some rando young nurse is listening outside the room. 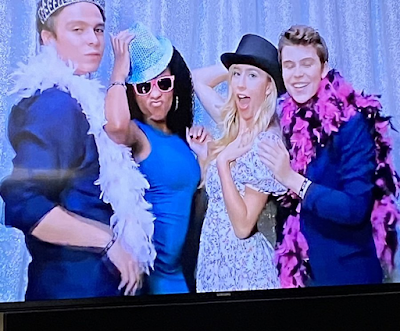 The party: OF COURSE we don't see anyone else. Even the photo booth was just the 4. I did predict that on twitter. NO WAY they'd pop for a real party.  Joss' bodyguard Tony is kinda hot. it's SO SO bad. Spencer got a mechanical bull (off camera) and the kids just talk inside as usual. Costas says the launch is missing. Cam and Joss go up to the parapet. The bodyguards freak because they can't get in touch with the drivers. Spencer gets a call from "Ryan"..(it's Nikolas) All the kids freak. Lights go out. Dayglo on the rug says: It Ends Tonight. The bodyguards tell them to lock themselves in the room. BUT Spencer and Trina go off to get the cell phone booster thingy to work.

Jax tapes Carly while they talk about Josslyn. He gets her to talk about the 5 Families. He brings up Morgan and how he helped raise him. They sent him to school to keep him safe and when he came home, he died LOL!! pffffffffft. Carly bitches. He gets her on tape saying she's head of the organization. Carly's suspicious of Jax's questions. She realizes he's taping her.

Oh yeah, Sam and Dante are at the pool. BAFk ... I mean, really boring. She does have on that terrible skirt tho. They kiss, they are going to date.

By kdmask - August 16, 2021
Email ThisBlogThis!Share to TwitterShare to FacebookShare to Pinterest